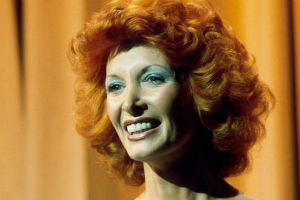 British comedienne and singer. Caine, who never lost her broad Sheffield accent, was considered a "regular" face on television. A gutsy lady, she triumphed over many hardships with a fighting spirit. Raised in a children's home when her dad died, she was later abused by her grandfather at 12.

A beauty-contest winner at 14, she spent the next few years modeling. Pregnant at 16, she married Malcolm Stringer and stayed with him for 17 years in spite of his philandering. They separated in May 1978. Her mom had died in 1967.

With two kids to raise, Caine went on the club circuit as a singer with quips and repartee that won her a following.

A conscientious mother and housekeeper by day, she played working-men's clubs at night for 15 years before winning a spot as a regular on a TV show. In addition to appearing as a guest star on numerous television shows, she starred in several shows such as the BBC’s "The Marti Caine Show," which ran for five seasons, 1977-84, and "Joker in the Pack," 1992. From 1986 she presented "New Faces" with a maternal understanding of the young talent who were traveling a road she'd once trod.

At Christmas 1988, she revealed that she had been diagnosed with incurable lymphatic cancer the prior September and been given 18 months to live. She nonetheless kept on and in 1993, had a bone marrow transplant. One of her recreational pleasures was modern art.

Caine was preparing for her annual pantomime season in 1995 when she again became ill and lost her battle, dying on 12/04/1995. Her autobiography is titled, "A Coward's Chronicle."