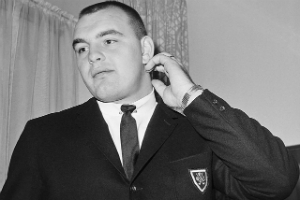 American football player and actor. Butkus was a noted athlete who played with the Chicago Bears for nine seasons and was elected to the Hall of Fame in 1979. After retirement he launched an acting career, beginning in the mid 1970s; he usually plays tough guys or athletes in episodes of TV series.

Butkus was the ninth child of a Lithuanian blue-collar family. Growing up on the South Side of Chicago, he learned how to be tough. After graduating from University of Illinois where he made his reputation as a champion linebacker, he was drafted in 1965 by the Bears. In September that year he made his national football league debut and did his coach proud in his first game. Known for his brutish and quick tackling, he led the team throughout his career in tackles. AT 6-foot-3, 240 pounds, he was not to be messed with. He claimed he would think of things to make him angry in preparation for his fierce performance on the field. \\\\\\\"If every college football team had a linebacker like Dick Butkus, all fullbacks would soon be three feet tall and sing soprano,\\\\\\\" Dan Jenkins wrote in Sports Illustrated. \\\\\\\"Dick Butkus is a special kind of brute whose particular talent is mashing runners into curious shapes.\\\\\\\" His he-man looks and attitude earned him endorsements for products like shaving cream and antifreeze.

Butkus\\\\\\\' brute force caused him several injuries and in 1973 he retired from his beloved game. Suing the Chicago Bears team doctor for malpractice in treating a knee injury, Butkus was awarded $600,000 in 1974. In 1997 he underwent knee reconstruction surgery.

Butkus went on to work in various TV episodes, commercials and occasionally sportscasts. He and his wife Helen, married since 1963, have three children, Rick, Mathew and Nikki.