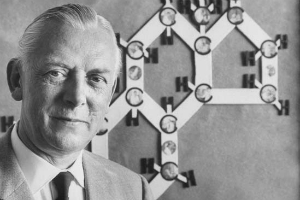 Adolf Friedrich Johann Butenandt (24 March 1903 – 18 January 1995) was a German biochemist and member of the Nazi party.

He was awarded the Nobel Prize in Chemistry in 1939 for his "work on sex hormones." He initially rejected the award in accordance with government policy, but accepted it in 1949 after World War II.

Born in Lehe, near Bremerhaven, he started his studies at the University of Marburg.

For his Ph.D he joined the working group of the Nobel laureate Adolf Windaus at the University of Göttingen and he finished his studies with a Ph.D. in chemistry in 1927.

Adolf Windaus and Walter Schöller of Schering gave him the advice to work on hormones extraced from ovaries. This research lead to the discovery of estrone and other primary female sex hormones, which were extracted from several thousand liters of urine. For this research he won the Nobel Prize for Chemistry in 1939 together with Leopold Ruži?ka who was involved in the synthesis of several newly discovered steroids.

Butenandt joined the Nazi Party on May 1, 1936 (party member No. 3716562). As the head of a leading institute, he applied for government funding on concentrated research labeled kriegswichtig (important for the war), some of which focused on military projects like the improvement of oxygen uptake for high-altitude bomber pilots. His involvement with the Nazi regime and various themes of research led to criticism after the war and even after his death, the exact nature of his political orientation during the Nazi era has never been fully resolved. When the institute moved to Tübingen in 1945 he became a professor at the University of Tübingen. In 1956, when the institute relocated to Martinsried, a suburb of Munich, Butenandt became a professor at the University of Munich. He also served as president of the Max Planck Society for the Advancement of Science following Otto Hahn from 1960 to 1972.

Butenandt is credited with the discovery and naming of the silkworm moth pheromone Bombykol in 1959.