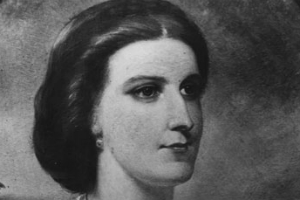 Isabel was one of eleven children born into the House of Wardour, a respected and well-to-do Roman Catholic family in England. She grew up enmeshed in London society and attended the convent of the Canonesses of the Holy Sepulchre, where she excelled as a writer and in theological studies.

During the Crimean War, Isabel was refused three times in her quest to be a 'Nightingale nurse' and instead set up an group of 150 like-minded women from Catholic families known as the Stella Club to assist the wives and children of soldiers who had married without permission and for whom the army took no responsibility. Such women and children were often in dire circumstances at home. Isabel and her group went into the slums of London, against the advice of police, to distribute assistance.

While on a school trip to Boulogne, she first met her future husband, Richard Burton, whom she claims to have fallen in love with immediately, though it would be another four years until their courtship began, and ten years until their marriage. Because of her strict Catholic background, her relationship with Burton caused strains within her family and she ultimately married him against the wishes of her parents. This was to be a major source of pain for her as the years progressed.

She was an intelligent, resourceful and devout woman, but is always seen in the shadow of her husband, one of the most famous of all Victorians. She was a strong supporter and advocate for her husband and assisted him on many of his most significant writings. He has credited her with being his most ardent supporter. He encouraged her to write and she wrote a number of books, including among them a history of their travels in Syria and Palestine, as well as an autobiography, published posthumously. Some scholars believe that Burton himself wrote under her name, though it is unclear.

She is perhaps best known for burning some of his papers and manuscripts after his death, including his revised translation of The Perfumed Garden, which was to be called The Scented Garden, and of which the largest part consisted of the usually unpublished final chapter dealing with pederasty, plus Burton's extensive (and comprehensive) notes on the subject.

In an appendix to her unfinished autobiography , her posthumous collaborator, W. H. Wilkins, points out that she had a first offer of £6,000 for the manuscript, a considerable fortune in those times, and moreover that she need never have disclosed her actions at all, or blamed them on her husband. He further claims that she acted from a sincere belief that "out of a thousand men who read the work, 15 would read it in the scientific spirit in which it was written, and the other 985 solely for filth's sake", and feared that publication would blight, not her husband's worldly reputation – for his interest in the subject was notorious – but, by tempting others to sin, his prospects in the world to come.

From her home in Baker Street she made regular visits to her husband's tomb in Mortlake and on one of these visits she noticed that a small cottage behind the churchyard was available for rent. She had a name-plate made for "Our cottage" and planted roses, ivy and honeysuckle round the front door. She now needed morphine injections to help her cope with the pain of the cancer, but she was determined to republish 34 of Richard's works in a memorial edition. In only eight months she finished the two-volume biography of Richard, The Life of Captain Sir Richard Francis Burton, which was published on 11 July 1893.

By 1895, Isabel was having difficulty in walking and, in the summer, a bout of influenza and a bad attack of abdominal pain meant that she was unable to progress very far on her own autobiography. So she contacted W.H. Wilkins and asked him to help her when she was able to return to the project. Wilkins's book, The Romance of Isabel Burton, was published in 1897.

In September 1895 Isabel moved to Eastbourne until the following March. She died in London on 22 March.

Her body and that of her husband lie in the churchyard of St Mary Magdalen's Roman Catholic Church Mortlake in south west London, in an elaborate tomb in the shape of a Bedouin tent which she designed.The coffins of Sir Richard and Lady Burton can be seen through a window at the rear of the tent, which can be accessed via a short fixed ladder. Next to the lady chapel in the church there is a memorial stained-glass window to Sir Richard, erected by Lady Isabel.