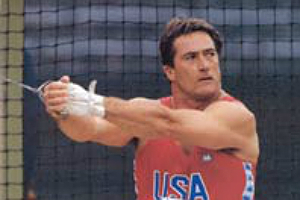 Edward ("Ed") Andrew Burke (born March 4, 1940) was an American hammer thrower, especially famous for carrying the flag of the United States at the Olympics in Los Angeles 1984. He was born in Ukiah, California. His best result at the Olympics was the 7th place in the 1964 Summer Olympics in Tokyo.

He also threw in the 1968 Summer Olympics, coming in as a favorite after setting the U.S. record of 235' 11" at the 1967 AAU Championships in Bakersfield, California (the same meet Jim Ryun ran his long standing 3:51.1 mile record), then the number two performance in history. After being (unjustly) called for a foul on his first two throws, he was so disappointed in his results that he retired from the sport following the Olympics. In 1979, he watched the World Cup on television with his daughters who had never seen dad throw. He marveled at the relative small size of champion Sergei Litvinov (URS). Just shy of his 40th birthday, he decided to give the Hammer one more whirl. After training he made the United States team at the first IAAF World Championships, and achieved his lifetime best of 243' 11" in the process of qualifying for his third Olympics at age 44 (a feat his contemporary Al Oerter also attempted and failed that year). He was the first American to achieve qualifying for Olympic teams 20 years apart (since equalled by Francie Larrieu-Smith, also from the San Jose area, in 1992). Being the oldest member of the team and a remarkable story, he was selected to carry the flag in the hometown Olympic Opening Ceremonies by the team captains.

“That’s what I’m known for. It’s one of those quirks of fate. People can’t remember who won the gold medal, but they remember the guy who carried the flag into the stadium.”

Following the Olympics, he again retired to tend the Los Gatos Athletic Club. He joined fellow Olympian, Discus Thrower Mac Wilkins in forming Explorer Post 813 in San Jose, California, dedicated to introducing boys to the art of throwing. They constructed throwing cages next to Highway 85, enlisting the help of other world-class athletes training in the hotbed San Jose area. 30 graduates of their program have gone on to throw for NCAA Division I schools, two of them Dave Popejoy and Kevin McMahon made U.S. Olympic teams.

21 years after his second retirement, he returned to competition in the 65 year old division. and promptly set the World Record for his age division. After turning 70 in 2010, he did it again in his new age division.

“I like training, but I like training for a purpose. I don’t really care how far I throw, I like the movement. It’s a puzzle. It’s been a puzzle my whole life.”