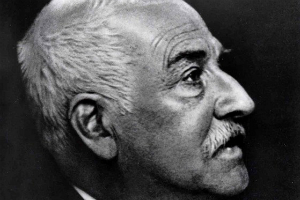 Carl Jacob Christoph Burckhardt (May 25, 1818 – August 8, 1897) was a historian of art and culture, and an influential figure in the historiography of each field. He is known as one of the major progenitors of cultural history. Siegfried Giedion described Burckhardt's achievement in the following terms: "The great discoverer of the age of the Renaissance, he first showed how a period should be treated in its entirety, with regard not only for its painting, sculpture and architecture, but for the social institutions of its daily life as well." Burckhardt's best known work is The Civilization of the Renaissance in Italy (1860).

The son of a Protestant clergyman, Burckhardt was born and died in Basel, where he studied theology in the hope of taking holy orders; however, under the influence of De Wette he chose not to become a clergyman. He finished his degree in 1839 and went to the University of Berlin to study history, especially art history, then a new field. At Berlin, he attended lectures by Leopold von Ranke, the founder of history as a respectable academic discipline based on sources and records rather than personal opinions. He spent part of 1841 at the University of Bonn, studying under the art historian Franz Kugler, to whom he dedicated his first book, Die Kunstwerke der belgischen Städte (1842). He taught at the University of Basel from 1843 to 1855, then at the engineering school ETH Zurich. In 1858, he returned to Basel to assume the professorship he held until his 1893 retirement. Only starting in 1886 did he teach art history exclusively. He twice declined offers of professorial chairs at German universities, at the University of Tübingen in 1867, and Ranke's chair at the University of Berlin in 1872.

Burckhardt's historical writings did much to establish the importance of art in the study of history; indeed, he was one of the "founding fathers of art history" but also one of the original creators of cultural history. According to John Lukacs, he was the first master of cultural history, which seeks to describe the spirit and the forms of expression of a particular age, a particular people, or a particular place. His innovative approach to historical research stressed the importance of art and its inestimable value as a primary source for the study of history. He was one of the first historians to rise above the narrow nineteenth-century notion that "history is past politics and politics current history." Burckhardt's unsystematic approach to history was strongly opposed to the interpretations of Hegelianism, which was popular at the time; economism as an interpretation of history; and positivism, which had come to dominate scientific discourses (including the discourse of the social sciences).

In 1838. Burckhardt made his first journey to Italy and published his first important article, "Bemerkungen über schweizerische Kathedralen" ("Remarks about Swiss Cathedrals"). Burckhardt delivered a series of lectures at the University of Basel, which were published in 1943 by Pantheon Books Inc. under the title Force and Freedom: An Interpretation of History by Jacob Burckhardt. In 1847 he brought out new editions of Kugler's two great works, Geschichte der Malerei and Kunstgeschichte, and in 1853 published his own work, Die Zeit Constantins des Grossen ("The Age of Constantine the Great"). He spent the greater part of the years 1853–1854 in Italy, collecting materials for his 1855 Der Cicerone: Eine Anleitung zum Genuss der Kunstwerke Italiens (7th German edition, 1899), also dedicated to Kugler. This work, "the finest travel guide that has ever been written" which covered sculpture and architecture, as well as painting, became an indispensable guide to the art traveller in Italy.

Burckhardt considered the study of ancient history an intellectual necessity and was a highly respected scholar of Greek civilization. "The Greeks and Greek Civilization" sums up the relevant lectures, "Griechische Kulturgeschichte", which Burckhardt first gave in 1872 and which he repeated until 1885. At his death, he was working on a four-volume survey of Greek civilization.

Friedrich Nietzsche, appointed professor of classical philology at Basel in 1869 at the age of 24, admired Burckhardt and attended some of his lectures. Both men were admirers of the late Arthur Schopenhauer. Nietzsche believed Burckhardt agreed with the thesis of his The Birth of Tragedy, namely that Greek culture was defined by opposing "Apollonian" and "Dionysian" tendencies. Nietzsche and Burckhardt enjoyed each other's intellectual company, even as Burckhardt kept his distance from Nietzsche's evolving philosophy. Their extensive correspondence over a number of years has been published. Burckhardt's student Heinrich Wölfflin succeeded him at the University of Basel at the age of only twenty-eight.

There is a tension in Burckhardt's persona between the wise and worldly student of the Italian Renaissance, and the cautious product of Swiss Calvinism, which he had studied extensively for the ministry. The Swiss polity in which he spent nearly all of his life was a good deal more democratic and stable than was the norm in nineteenth century Europe. As a Swiss, Burckhardt was also cool to German nationalism and to German claims of cultural and intellectual superiority. He was also amply aware of the rapid political and economic changes taking place in the Europe of his day, commenting in his lectures and writings on the Industrial Revolution, the European political upheavals of his day, and the growing European nationalism and militarism. Events amply fulfilled his prediction of a cataclysmic twentieth century, in which violent demagogues (whom he called "terrible simplifiers") would play central roles. In later years, Burckhardt found himself unimpressed by democracy, individualism, socialism and a great many other ideas which were fashionable during his lifetime.

He also observed over a century ago, “the state incurs debts for politics, war, and other higher causes and ‘progress’. . . . The assumption is that the future will honor this relationship in perpetuity. The state has learned from the merchants and industrialists how to exploit credit; it defies the nation ever to let it go into bankruptcy. Alongside all swindlers the state now stands there as swindler-in-chief.”