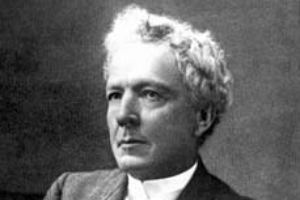 Luther Burbank (7 March 1849 – 11 April 1926) was an American botanist, horticulturist and a pioneer in agricultural science. He developed more than 800 strains and varieties of plants over his 55-year career. Burbank's varied creations included fruits, flowers, grains, grasses, and vegetables. He developed a spineless cactus (useful for cattle-feed) and the plumcot.

Burbank's most successful strains and varieties include the Shasta daisy, the fire poppy, the 'July Elberta' peach, the 'Santa Rosa' plum, the 'Flaming Gold' nectarine, the 'Wickson' plum, the freestone peach, and the white blackberry. A natural genetic variant of the Burbank potato with russet-colored skin later became known as the Russet Burbank potato. This large, brown-skinned, white-fleshed potato has become the world's predominant potato in food processing.

Born in Lancaster, Massachusetts, Burbank grew up on a farm and received only an elementary school education. The thirteenth of fifteen children, he enjoyed the plants in his mother's large garden. His father died when he was 21 years old, and Burbank used his inheritance to buy a 17-acre (69,000 m²) plot of land near Lunenburg center. There, he developed the Burbank potato. Burbank sold the rights to the Burbank potato for $150 and used the money to travel to Santa Rosa, California, in 1875. Later, a natural sport of Burbank potato with russetted skin was selected and named Russet Burbank potato. Today, the Russet Burbank potato is the most widely cultivated potato in the United States. A large percentage of McDonald's french fries are made from this cultivar.

In Santa Rosa, Burbank purchased a 4-acre (16,000 m2) plot of land, and established a greenhouse, nursery, and experimental fields that he used to conduct crossbreeding experiments on plants, inspired by Charles Darwin's The Variation of Animals and Plants under Domestication. (This site is now open to the public as a city park, Luther Burbank Home and Gardens.) Later he purchased an 18-acre (7.3 ha) plot of land in the nearby town of Sebastopol, called Gold Ridge Farm.

From 1904 through 1909 Burbank received several grants from the Carnegie Institution to support his ongoing research on hybridization. He was supported by the practical-minded Andrew Carnegie himself, over those of his advisers who objected that Burbank was not "scientific" in his methods.

Burbank became known through his plant catalogs, the most famous being 1893's "New Creations in Fruits and Flowers," and through the word of mouth of satisfied customers, as well as press reports that kept him in the news throughout the first decade of the century.

Burbank was criticized by scientists of his day because he did not keep the kind of careful records that are the norm in scientific research and because he was mainly interested in getting results rather than in basic research. Purdue University professor Jules Janick, writing in the 2004 World Book Encyclopedia, says: "Burbank cannot be considered a scientist in the academic sense."

In 1893, Burbank published a descriptive catalog of some of his best varieties, entitled New Creations in Fruits and Flowers.

In 1907, Burbank published an “essay on childrearing,” called The Training of the Human Plant. In it, he advocated improved treatment of children.

During his career, Burbank wrote, or co-wrote, several books on his methods and results, including his eight-volume How Plants Are Trained to Work for Man (1921), Harvest of the Years (with Wilbur Hall, 1927), Partner of Nature (1939), and the 12-volume Luther Burbank: His Methods and Discoveries and Their Practical Application.

Burbank experimented with a variety of techniques such as grafting, hybridization, and cross-breeding.

Intraspecific hybridization within a plant species was demonstrated by Charles Darwin and Gregor Mendel, and was further developed by geneticists and plant breeders.

In 1908, George Harrison Shull described heterosis, also known as hybrid vigor. Heterosis describes the tendency of the progeny of a specific cross to outperform both parents. The detection of the usefulness of heterosis for plant breeding has led to the development of inbred lines that reveal a heterotic yield advantage when they are crossed. Maize was the first species where heterosis was widely used to produce hybrids.

By the 1920s, statistical methods were developed to analyze gene action and distinguish heritable variation from variation caused by environment. In 1933, another important breeding technique, cytoplasmic male sterility (CMS), developed in maize, was described by Marcus Morton Rhoades. CMS is a maternally inherited trait that makes the plant produce sterile pollen. This enables the production of hybrids without the need for labour intensive detasseling.

These early breeding techniques resulted in large yield increase in the United States in the early 20th century. Similar yield increases were not produced elsewhere until after World War II, the Green Revolution increased crop production in the developing world in the 1960s.

Classical plant breeding uses deliberate interbreeding (crossing) of closely or distantly related individuals to produce new crop varieties or lines with desirable properties. Plants are crossbred to introduce traits/genes from one variety or line into a new genetic background. For example, a mildew-resistant pea may be crossed with a high-yielding but susceptible pea, the goal of the cross being to introduce mildew resistance without losing the high-yield characteristics. Progeny from the cross would then be crossed with the high-yielding parent to ensure that the progeny were most like the high-yielding parent, (backcrossing). The progeny from that cross would then be tested for yield and mildew resistance and high-yielding resistant plants would be further developed. Plants may also be crossed with themselves to produce inbred varieties for breeding.

Classical breeding relies largely on homologous recombination between chromosomes to generate genetic diversity. The classical plant breeder may also makes use of a number of in vitro techniques such as protoplast fusion, embryo rescue or mutagenesis (see below) to generate diversity and produce hybrid plants that would not exist in nature.

Traits that breeders have tried to incorporate into crop plants in the last 100 years include:

Increased quality and yield of the crop

Resistance to viruses, fungi and bacteria

Burbank cross-pollinated the flowers of plants by hand and planted all the resulting seeds. He then selected the most promising plants to cross with other ones.

By all accounts, Burbank was a kindly man who wanted to help other people. He was very interested in education and gave money to the local schools. He married twice: to Helen Coleman in 1890, which ended in divorce in 1896; and to Elizabeth Waters in 1916. He had no children.

His friend and admirer Paramahansa Yogananda wrote in his Autobiography of a Yogi:

His heart was fathomlessly deep, long acquainted with humility, patience, sacrifice. His little home amid the roses was austerely simple; he knew the worthlessness of luxury, the joy of few possessions. The modesty with which he wore his scientific fame repeatedly reminded me of the trees that bend low with the burden of ripening fruits; it is the barren tree that lifts its head high in an empty boast. (Yogananda, 1952, p. 416)

In a speech given to the First Congregational Church of San Francisco in 1926, Burbank said:

I love humanity, which has been a constant delight to me during all my seventy-seven years of life; and I love flowers, trees, animals, and all the works of Nature as they pass before us in time and space. What a joy life is when you have made a close working partnership with Nature, helping her to produce for the benefit of mankind new forms, colors, and perfumes in flowers which were never known before; fruits in form, size, and flavor never before seen on this globe; and grains of enormously increased productiveness, whose fat kernels are filled with more and better nourishment, a veritable storehouse of perfect food—new food for all the world's untold millions for all time to come.

In mid-March 1926, Burbank suffered a heart attack and became ill with gastrointestinal complications. He died on April 11, 1926, aged 77, and is buried near the greenhouse at the Luther Burbank Home and Gardens.

In 1986, Burbank was inducted into the National Inventors Hall of Fame. The Luther Burbank Home and Gardens, in downtown Santa Rosa, are now designated as a National Historic Landmark. Luther Burbank's Gold Ridge Experiment Farm is listed in the National Register of Historic Places a few miles west of Santa Rosa in the town of Sebastopol, California.

The home that Luther Burbank was born in, as well as his California garden office, were moved by Henry Ford to Dearborn, Michigan, and are part of Greenfield Village.