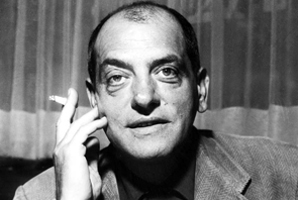 Spanish filmmaker who began his cinema studies in Paris in 1925; within a year he was an assistant director. Bunuel shot a surrealistic film with Dali in 1930, his surrealistic masterpiece, "The Golden Age."

In a speech he once said, "In the hands of a free spirit, the cinema is a magnificent and dangerous weapon." It was a weapon the great Spanish director wielded with mischievous and mysterious humor. Preoccupied with sexual aberrations and far-out fetishes, he assaulted the church, the establishment and middle-class morality with equal fervor, eliciting a public outcry from the beginning of his career.

Bunuel was given a Catholic education, served in the Mass and became fluent in Latin. In his teen year, he lost his faith in the church. The obsessions that drove him included communism, fetishism, hatred of the Franco regime that had forced him into exile in 1936 and his equal loathing of the Catholic Church.

At 17, he went to Madrid where he cultivated the banjo, the bosing ring and the brothel. His studies were widely eclectic and his friendships brimmed with the writers and thinkers of his day, including Lorca and Dali. After leaving Spain in 1925, cinema was a natural medium for his voice.

Working in France, Spain, Mexico and the U.S. Bunuel created films that included "Diary of a Chambermaid," 1964 "Belle De Jour," 1967 and "The Milky Way," 1969. He published his autobiography, "My Last Sigh," in 1983, a delightful book, filled with typically sly, iconoclastic observations. When he first went to Hollywood, his proudest moment was being thrown off the set by Garbo. Nonetheless, he spent most of WW II in that film capital. In 1946, he moved to Mexico for close to 15 years. His American Oscar was awarded in 1973 for "The Discreet Charm of the Bourgeoisie."

His French wife, Jeanne, wrote a book about their long and happy marriage, published in Spanish in 1990. After meeting in a friend's studio in Paris, he courted her respectfully until their marriage eight years later.