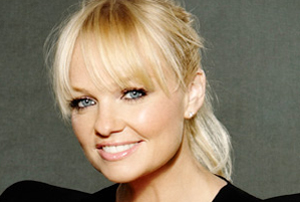 Emma Lee Bunton (born 21 January 1976  is an English pop singer, songwriter, and occasional actress. Emma is best known for being a member of the successful '90s girl group, Spice Girls. Emma was known as "Baby Spice", in the group, as she was the youngest member, had an "innocent" demeanour, and often wore "baby doll" dresses.

Bunton was born in Finchley and grew up in Woodside Park, both in Barnet, London. Her parents, Pauline, a karate instructor, and Trevor, a milkman, split up when she was eleven, and she stayed with her mother. She has a younger brother, Paul James. She attended St Theresa's Roman Catholic Primary School in Finchley, and then went on to go to the Sylvia Young Theatre School in Marylebone, Westminster. In 1993, she appeared in the on-going ITV1's police drama series The Bill, and also auditioned (although unsuccessfully) for the role of Bianca, later to be played by Patsy Palmer, in the BBC's soap opera EastEnders.

Music career
She joined the Spice Girls (then still called Touch) in 1994 after the original fifth Touch member, Michelle Stephenson, left the group. The group became one of the most successful musical artists of the 1990s selling thirty-five million albums with the studio releases Spice (1996), Spiceworld (1997), and Forever (2000). She was known as Baby Spice because she often wore baby doll dresses and had her blonde hair in pigtails. Their debut single "Wannabe" became the first of a string of number ones in the United Kingdom (nine in total) and reached the top position in thirty-seven countries around the globe, including Australia, Canada, Ireland, and the U.S. In 1999, she presented her own music show entitled Emma on VH1. The Spice Girls stopped recording in 2000. Many rumours circulated about a reunion for the group's tenth anniversary, but nothing materialised until June 2007, when they reformed for a Spice Girls reunion tour and Best Hits CD.

Her debut solo album entitled A Girl Like Me spawned the UK number-one hit "What Took You So Long?" as well as the top five hits "What I Am" (a cover of a 1988 song earlier recorded by Edie Brickell & New Bohemians) and "Take My Breath Away" (which has nothing to do with Berlin's 1986 hit), and the top twenty hit "We're Not Gonna Sleep Tonight". The album sold approximately 125,000 copies in the UK. Due to the disappointing sales of the project, Bunton parted with Virgin in 2002.

Bunton then signed a contract with Spice Girls' manager Simon Fuller's 19 Management and a complex licensing deal with Polydor Records, which included TV work and releasing music. In the spring of 2003, she returned as Emma (losing the Bunton), with the top five hit "Free Me" and later that year released "Maybe", which also went top ten. In the spring of 2004, the single "I'll Be There" and the album Free Me were released. The album contained '60s-style pop gems and outsold her first album. Free Me was released in the United States on 25 January 2005, but it didn't manage to chart on the U.S. Billboard 200 despite her appearances on major U.S. talk shows such as The View, Live with Regis and Kelly, and The Tony Danza Show to promote the album. She also made a number of promotional appearances for album signings in the U.S., including the gay bar XL Lounge, in New York City. Her first single released in the U.S. was a dance remix of the album's title track, which reached the top five of both the Hot Dance Club Play and the Hot Dance Airplay. "Maybe" also followed the success of "Free Me" on the U.S. dance chart.

In November 2006, Bunton released the official charity single for the BBC Children in Need appeal, recording a cover of Petula Clark's '60s classic "Downtown". It peaked at number three on the UK Singles Chart and was followed by her third studio album, Life in Mono, released on 4 December. The album entered the UK Albums Chart at number sixty-five, selling approximately 13,000 copies in its first week. To date, it has sold more than 45,000 copies in the UK. The second single from it was "All I Need to Know", released on 12 February 2007, intended for the Valentine's Day market. Bunton shot the video around Old Street in East London, in the week before Christmas 2006. Entering the UK Singles Chart at number sixty, "All I Need to Know" became Bunton's lowest-charting single of her solo career.

Recently, Emma Bunton is back with the Spice Girls when an announcement was made on June 28 2007.

Television and film
In October 2006, Bunton appeared as one of the celebrity contestants in the autumn 2006 series of the popular BBC programme Strictly Come Dancing and was partnered with professional dancer Darren Bennett. Despite being the bookies' favourite, she was placed third overall, and was the final female contestant to be eliminated.

She has also appeared in other roles in recent years, most notably in the fifth and final season of Absolutely Fabulous playing herself in a couple of episodes. She has also guest-presented the television programmes SM:TV Live, T4 and hosted her own show Emma for VH1. In August 2006, former Spice Girls' manager Simon Fuller announced that he was planning a television sitcom based around Bunton.

Bunton has recently been seen in a high-profile television commercial for the supermarket chain Tesco. She also had a cameo role on the Australian soap opera Neighbours as herself on the episode titled "What's a Spice Girl Like You...?", aired on 19 March 2007 in Australia, and on 25 May 2007 in the UK. Bunton returned to US screens with a nationwide commercial for Prego in May of 2007.

Personal life
She has been linked with such stars as actor Nigel Harman, pop singer Justin Timberlake, and 911 lead singer Lee Brennan.

Her boyfriend of eight years is former Damage and current CherryBlackStone lead singer Jade Jones. In October 2006, there were rumours that the couple were engaged, with plans to marry in March 2007. This rumour was denied several days later.

After being diagnosed with endometriosis, a condition which can reduce fertility, Bunton and Jones announced in January 2007 that they were expecting their first child together (rumored to be a Girl), due sometime in the summer. It was rumoured that Prince William was to be one of the baby's godparents. However, Bunton appeared as a guest on the 11 February episode of Loose Women, where she denied that this was the case, stating that, yes, she and William were friends, and "exchanged X-mas cards", but that he would not be one of the baby's godparents.