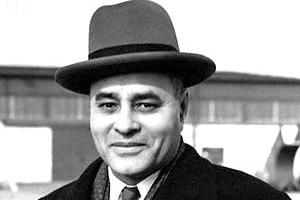 He was the first African American and person of color to be so honored in the history of the prize. He was involved in the formation and administration of the United Nations and in 1963, was awarded the Medal of Freedom by President John F. Kennedy.

For more than two decades, Bunche served as chair of the Department of Political Science at Howard University (1928 to 1950), where he also taught generations of students. He served as a member of the Board of Overseers of his alma mater, Harvard University (1960–1965), as a member of the board of the Institute of International Education, and as a trustee of Oberlin College, Lincoln University, and New Lincoln School.

Bunche was born in Detroit, Michigan in 1903 or 1904 and baptized at the city's Second Baptist Church. His father, Fred, was a barber, while his mother, Olive Agnes (née Johnson), was an amateur musician, from a "large and talented family." Her siblings included Charlie and Ethel Johnson.

His maternal grandfather, Thomas Nelson Johnson, was the son of Eleanor Madden and her husband; she was the daughter of an African-American slave mother and Irish planter father. Johnson, who graduated from Shurtleff College in Alton, Illinois in 1875, also taught there. That September he married Lucy Taylor, one of his students.

Fred Bunche is believed to have had Bunch and other ancestors who were established as free people of color in Virginia before the American Revolution. The Bunch/Bunche surname was extremely rare. In 2012 researchers published evidence showing that Bunch male descendants can be traced through historical records and y-DNA analysis to John Punch, an African indentured servant sentenced to life service in 1640, and considered to be the first slave in Virginia.

President Barack Obama is also believed to be among Punch's many descendants.

When Ralph was a child, his family moved to Toledo, Ohio, where his father looked for work. They returned to Detroit in 1909 after his sister Grace was born, with the help of their maternal aunt, Ethel Johnson. Their father did not live with the family again after Ohio and had not been "a good provider," but followed them when they moved to New Mexico.

In 1915, together with Ralph's maternal grandmother, Lucy Taylor Johnson, they moved to Albuquerque, New Mexico, for the health of his mother and her brother Charlie Johnson, who both suffered from tuberculosis. His mother died in 1917 and Charlie committed suicide three months later. Ralph Bunche was 13.

In 1918 Lucy Taylor Johnson moved with her two grandchildren to the South Central neighborhood of Los Angeles, which was then mostly white. Fred Bunche later remarried, and Ralph never saw him again.

Bunche was a brilliant student, a debater, and the valedictorian of his graduating class at Jefferson High School. He attended the University of California, Los Angeles (UCLA), and graduated summa cum laude in 1927 as the valedictorian of his class. Using the money his community raised for his studies and a graduate scholarship at Harvard University, he earned a doctorate in political science. To help with his living expenses while at Harvard, Bunche sought a job at a local bookstore. The owner offered him a part-time job, and Bunche ran the store to his employer's satisfaction. One day the owner called him into the office and said, "Folks tell me you're a Negro. I don't give a damn, but are you?" Bunche asked, "What did you think?" and the owner said, "I couldn't see you clear enough." Bunche was multiracial, and showed his European and African ancestry.

Bunche earned a master's degree in political science in 1928 and a doctorate in 1934, while he was already teaching in Howard University's Department of Political Science. It was typical then for doctoral candidates to start teaching before completion of their dissertations. He was the first African American to gain a PhD in political science from an American university. He published his first book, World View of Race, in 1936. From 1936 to 1938, Ralph Bunche conducted postdoctoral research in anthropology at the London School of Economics (LSE), and later at the University of Cape Town in South Africa.

Bunche chaired the Department of Political Science at Howard University from 1928 until 1950, where he taught generations of students. He lived in the Brookland neighborhood of Washington, D.C., and was a member of the American Federation of Teachers affiliate at Harvard.

In 1936 during the Great Depression, Bunche became concerned about issues of social class and economic inequality. He wrote a pamphlet entitled "A World View of Race." In it, Bunche said: "And so class will some day supplant race in world affairs. Race war will then be merely a side-show to the gigantic class war which will be waged in the big tent we call the world." From 1936 to 1940, Bunche served as contributing editor of the journal Science and Society: A Marxian Quarterly, which published articles from the Left.

During World War II, Bunche worked in the Office of Strategic Services (OSS), the predecessor of the CIA, as a senior social analyst on Colonial Affairs. In 1943, he joined the State Department. He was appointed Associate Chief of the Division of Dependent Area Affairs under Alger Hiss. With Hiss, Bunche became one of the leaders of the Institute of Pacific Relations (IPR). He participated in the preliminary planning for the United Nations at the San Francisco Conference of 1945.

Work with the United Nations

"...championed the principle of equal rights for everyone, regardless of race or creed. He believed in "the essential goodness of all people, and that no problem in human relations is insoluble." Through the UN Trusteeship Council, Bunche readied the international stage for a period of rapid transformation, dismantling the old colonial systems in Africa and Asia, and guiding scores of emerging nations through the transition to independence in the post-war era."

Beginning in 1947, Bunche was involved with trying to resolve the Arab-Israeli conflict. He served as assistant to the United Nations Special Committee on Palestine, and thereafter as the principal secretary of the UN Palestine Commission. In 1948, he traveled to the Middle East as the chief aide to Sweden's Count Folke Bernadotte, who had been appointed by the UN to mediate the conflict. These men chose the island of Rhodes for their base and working headquarters. In September 1948, Bernadotte was assassinated in Jerusalem by members of the underground Jewish group Lehi.

Following the assassination, Bunche became the UN's chief mediator; he conducted all future negotiations on Rhodes. The representative for Israel was Moshe Dayan; he reported in memoirs that much of his delicate negotiation with Bunche was conducted over a billiard table while the two were shooting pool. Optimistically, Bunche commissioned a local potter to create unique memorial plates bearing the name of each negotiator. When the agreement was signed, Bunche awarded these gifts. After unwrapping his, Dayan asked Bunche what might have happened if no agreement had been reached. "I'd have broken the plates over your damn heads," Bunche answered. For achieving the 1949 Armistice Agreements, Dr. Bunche received the Peace Prize, in 1950. He continued to work for the United Nations, mediating in other strife-torn regions, including the Congo, Yemen, Kashmir, and Cyprus. Bunche was appointed as undersecretary-general in 1968.

Bunche was an active and vocal supporter of the civil rights movement. He participated in the 1963 March on Washington, where Martin Luther King gave his "I Have a Dream" speech, and also in the Selma to Montgomery, Alabama march, which contributed to the passage of the landmark Voting Rights Act of 1965 and federal enforcement of voting rights.[14]

Bunche lived in the Kew Gardens neighborhood of Queens, New York, from 1953 until his death. Like other people of color, Bunche continued to struggle against racism across the United States and in his own neighborhood. In 1959, he and his son, Ralph, Jr., were denied membership in the West Side Tennis Club in the Forest Hills neighborhood of Queens. After the issue was given national coverage by the press, the club offered the Bunches an apology and invitation of membership. The official who had rebuffed them resigned. Bunche refused the offer, saying it was not based on racial equality and was an exception based only on his personal prestige.

At the time of his death, Bunche was survived by his wife, daughter Joan, son Ralph and three Pierce grandchildren. His wife later enjoyed three additional grandchildren and several great-grandchildren.

On October 9, 1966, their daughter Jane Bunche Pierce fell or jumped from the roof of her Riverdale, Bronx apartment building; her death was believed to be suicide. She left no note. She was married to Burton Pierce, a Cornell University alumnus who was a labor relations executive, and they had three children. Their apartment was on the first floor of the building.

Bunche resigned from his position at the UN due to ill health, but this was not announced as Secretary-General U Thant hoped he would be able to return soon. His health did not improve, and Bunche died December 9, 1971, at age 68. He was survived by his wife and two of their three children. He is buried in Woodlawn Cemetery in the Bronx, New York.