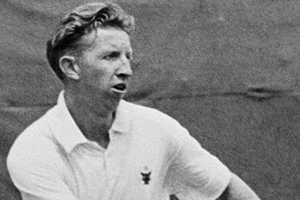 American tennis player who, by 1937, played 12 championship matches and won every one of them. Four years prior, after being coaxed away from football, he had won California's Junior Championship and he made the Davis Cup team two years later.

His 1937 game against Germany's champion, Baron von Gramm, is still talked about among tennis buffs as one of the most incredible exhibits of the game ever staged. The match also led to an international incident in the world of sports. When von Gramm lost, he was imprisoned by the Third Reich on a morals charge which many thought was no more than a punishment by Hitler's government. In protest, Budge refused an invitation to play in Germany the following year.

In 1937, he was named the Most Outstanding Amateur Athlete of the Year. In 1938, he created a record that has never been equaled. He won the Australian, French, Wimbledon and U.S. singles championships.

His first pro match was held in Madison Square Garden on 1/03/1939 before 16,000 fans. Whenever he toured and wherever he played, he was a top draw.

Among his business concerns, he invested in a string of laundries. During the summers, he was in charge of Chatham Hall Boy's School in Virginia, in the fall and spring he commuted between tennis clubs, and during the remaining months he took vacations. His two books, "On Tennis," and "How Lawn Tennis is Played" are still basic books for any serious participant.

The copper-haired champion died on 1/26/2000 in Scranton, PA following injuries sustained in a December auto accident.