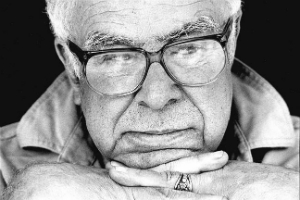 American Pulitzer-Prize winning journalist, columnist, raconteur and bon vivant. Looking like a genial bulldog dressed in a brightly-colored sports jacket and slacks and puffing a cigar, he begins an anecdote. His eyes light up, his face crinkles and he transforms into an impish boy hoping the world will like him.

He survived a painful childhood, as his mom went into a mental institution when he was three months old. Raised in the Hebrew Orphanage in New York, he saw his dad once a week, and he was shifted into six successive foster homes. One of the dysfunctional families he spent time with told such horrid stories of demons that he had nightmares for years afterwards. He told of losing his virginity at 15 to a hotel chambermaid. When he ran away to join the military in 1942 to see action in the South Pacific, he thought that the Marines were the best foster family he'd ever had. After university, he moved to Paris in 1948 where he joined the Herald Tribune for which he wrote a regular column, "Paris After Dark."

Subject to bouts of deep depression, he periodically plunged into suicidal darkness. He spent a month in a hospital in 1963 and again in 1987, during which time he continued writing. His book, "Leaving Home," was a best-selling memoir of his traumatic childhood, identifying the depths of his crippling depression. Going public about his illness in 1994, he offered hope to the some 17.5 million adult Americans who suffer from the agony of clinical depression. Buchwald turned his pain into humor with the creation of political word cartoons and syndicated humor columns that were printed in 510 newspapers. Humor was his salvation, the antidote to the misery of his youth. By 1981 he had written 24 books, including three memoirs. The first, "Leaving Home," speaks of his childhood, his three-year hitch as a WW II Marine in the Pacific and three years at USC. "I'll Always Have Paris" covers the European years, a hilarious recounting of his adventures that took him from the grungy Polish hotel in Montparnasse to the yachts of the "Onassi," from picking up girls in the Louvre to squiring Gina Lollobrigida to a gala in Monaco, from his peasant palate to gourmet dining, from counting pennies to bar-hopping at the St. Moritz. He also writes of the courtship of his beloved wife Ann McGarrey, whom he married in 1952 and the adoption of their three kids in Ireland, Spain and France. His books include, "I Am Not a Crook" in 1974 and "Down the Seine and Up the Potomac" in 1977. The Pulitzer Prize for Outstanding Commentary was awarded to him in 1982. Four years later, in 1986, he was elected to the American Academy and Institute of Arts and Letters.

On January 8, 1990, Buchwald won a lawsuit against Paramount Pictures that awarded him over $5 million. The money was his share of the profits on one of his script treatments that was later used for a hit movie starring Eddie Murphy.

He and his wife were separated in 1992, and Ann died in 1994. Buchwald lived quietly in a Washington, D.C. apartment, keeping in touch with family, friends and his three grandsons, all the while writing. He alternated living in Martha’s Vineyard where he often held court with other famous visitors and neighbors. On June 16, 2000 he suffered a stroke that left him in intensive care, serious but stable condition.

His health continued to fail. In early February 2006 he checked into a Washington, DC nursing home as part of a hospice program and began to plan his funeral. One of his legs had been amputated below the knee because of poor circulation and he was facing dialysis and imminent death. Shortly afterwards, he made public his decision to forego dialysis, telling one reporter that "I had two decisions. Continue dialysis, and that's boring to do three times a week, and I don't know where that's going, or I can just enjoy life and see where it takes me."

In the style that endeared him to so many, he amused his visitors, family, fans and the hospice staff with humorous snippets and matter-of-fact wisdom about the end of life, preparing for his own death with grace and dignity. "I never realized that dying was so much fun," he wrote in one column.

As he recounts it, he was on his way to heaven, but went to Martha’s Vineyard instead. In July 2006 he arrived home with a functional kidney, quipping “Some people bless their hearts; I bless my kidney…. Now I have a new leg. I have a life. I have a book I hope to finish soon. It's called “Too Soon to Say Goodbye” and the subject is, as he puts it, "the man who wouldn't die."

The humorist died on the evening of January 17, 2007 in Washington, DC, of kidney failure.