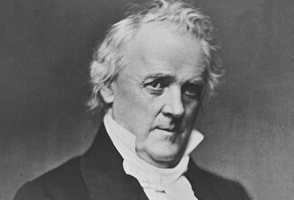 James McGill Buchanan, Jr. ( October 3, 1919 – January 9, 2013) was an American economist known for his work on public choice theory, for which in 1986 he received the Nobel Memorial Prize.

Buchanan's work initiated research on how politicians' self-interest and non-economic forces affect government economic policy. He was a Member of the Board of Advisors of The Independent Institute, a Distinguished Senior Fellow of the Cato Institute, and professor at George Mason University.

Buchanan was born in Murfreesboro, Tennessee, the eldest child of James and Lila (Scott) Buchanan. He was a grandson of John P. Buchanan, who served as Governor of Tennessee in the 1890s. He graduated from Middle Tennessee State Teachers College, now known as Middle Tennessee State University, in 1940. Buchanan completed his M.S. from the University of Tennessee in 1941. He spent the war years on the staff of Admiral Nimitz in Honolulu, and it was during that time he met and married his wife Anne. Anne, who was of Norwegian descent, was working as a nurse at the military base in Hawaii.

Buchanan received his Ph.D. from the University of Chicago in 1948 with a thesis titled "Fiscal Equity in a Federal State", in which he was heavily influenced by Frank H. Knight. It was also at Chicago that he read for the first time and found enlightening the work of Knut Wicksell.[citation needed] Photographs of Knight and Wicksell have hung from his office-walls ever since.

Buchanan was the founder of a new Virginia school of political economy. He taught at the University of Virginia—where he founded the Thomas Jefferson Center for the Protection of Free Expression—UCLA, Florida State University, the University of Tennessee, and the Virginia Polytechnic Institute, where he founded the Center for the Study of Public Choice (CSPC). In 1983 a conflict with Economics Department head Daniel M. Orr came to a head and Buchanan took the CSPC to its new home at George Mason University.  In 1988 Buchanan returned to Hawaii for the first time since the War and gave a series of lectures later published by the University Press. In 2001 Buchanan received an honorary doctoral degree from Universidad Francisco Marroquín, in Guatemala City, Guatemala, for his contribution to economics. Buchanan's work focused on public finance, the public debt, voting, rigorous analysis of the theory of logrolling, macroeconomics, constitutional economics, and libertarian theory.

Buchanan died January 9, 2013, in Blacksburg, Virginia, at age 93.  The New York Times commented that the Nobel Prize-winning economist who championed public choice theory influenced a "generation of conservative thinking about deficits, taxes, and the size of government". The Badische Zeitung called Buchanan, who showed how politicians undermine fair and simple tax systems, the "founder of the New Political Economy".

Buchanan was largely responsible for the rebirth of political economy as a scholarly pursuit. Buchanan emphasized that public policy cannot be considered in terms of distribution, but is instead always a question of the choice over rules of the game that engender a pattern of exchange and distribution. His work in public choice theory is often interpreted as the quintessential case of economic imperialism;  however, as Amartya Sen has argued, Buchanan should not be identified with economic imperialism, since Buchanan has done more than most to introduce ethics, legal political thinking, and indeed social thinking into economics.  Crucial to understanding Buchanan's system of thought is the distinction he made between politics and policy. Politics is about the rules of the game, where policy is focused on strategies that players adopt within a given set of rules. “Questions about what are good rules of the game are in the domain of social philosophy, whereas questions about the strategies that players will adopt given those rules is the domain of economics, and it is the play between the rules (social philosophy) and the strategies (economics) that constitutes what Buchanan refers to as constitutional potical economy”.

Buchanan is considered to be a quasi-member of the Austrian school of economics, not formally associated with the school but sharing many common beliefs.  As Buchanan put it: "I certainly have a great deal of affinity with Austrian economics and I have no objections to being called an Austrian. Hayek and Mises might consider me an Austrian but, surely some of the others would not." Buchanan went on to say that: "I didn't become acquainted with Mises until I wrote an article on individual choice and voting in the market in 1954. After I had finished the first draft I went back to see what Mises had said in Human Action. I found out, amazingly, that he had come closer to saying what I was trying to say than anybody else."