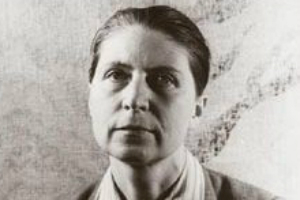 British novelist, poet, and critic, occasional actress and producer, but best known for her historical fiction. She was the cofounder and coeditor of "Close Up," an authoritative journal on silent motion pictures.

She grew up in an advantaged household; her father was industrialist and financier Sir John Reeves Ellerman, and she, with her family, spent much time traveling abroad. She took her name "Bryher" from a favorite island. Although she began studying archaeology, World War I interrupted, and during 1917-18, she wrote reviews and articles for various magazines. In 1919, she published her first novel, "Development" and visited the United States for the first time. She married the American writer Robert McAlmon, settling with him in Montreux, Switzerland.

She and McAlmon were divorced in 1927and she married Kenneth Macpherson that same year. That year she legally changed her name to Winifred Bryher and adopted a young girl named Perdita, the daughter of Bryher's good friend, the poet, Hilda Doolittle (H.D.).

In 1927, Bryher's husband Kenneth Macpherson made two films "Wingbeat" and "Foothills" starring H.D. With her interest in films, Bryher then established "Close Up", a magazine, and Pool Productions, a film company. In 1929, Bryher published "Film Problems of Soviet Russia" and that year, Pool Productions began filming "Borderline" starring H.D. and Bryher herself.

During the 30s she continued writing and living the literary life but the political upheavals in Europe at the time focused her attention elsewhere. She and her husband had moved to a Vaud, Switzerland and she gave shelter and assistance to over one hundred refugees.

After the war, in 1948, Bryher and MacPherson divorced and she changed her name again, this time dropping "Winifred" and becoming simply "Bryher." She wrote her first historical novel, The Fourteenth of October" in 1952 and continued writing and traveling throughout her life. A woman of many interests, art, film, culture, archaeology and psychology, and a prolific writer, Bryher died January 28, 1983 at her home, Villa Kenwin, in Vaud, Switzerland. She was 88. Her papers were acquired by Yale University.