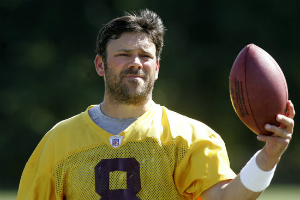 His superior abilities earned him the right to play in the Pro Bowl during both the 1996 and 1997 seasons. His Pro Bowl performance in 1996 was so good, that he was named Outstanding Player of the game. Brunell's career first began when he was signed by the Green Bay Packers on 7/01/1993. His relationship with the Packers lasted for about two years; he was traded to the Jaguars on 4/21/1995.