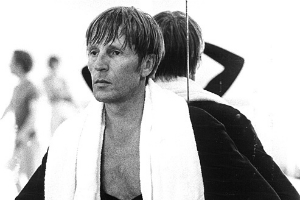 Erik Bruhn was born in Copenhagen, Denmark, the fourth child and first son of Ellen (née Evers), owner of a hairdressing salon, and third child of Ernst Bruhn. His parents married shortly before his birth. Bruhn began training with the Royal Danish Ballet when he was nine years old, and made his unofficial début on the stage of Copenhagen's Royal Opera House in 1946, dancing the role of Adonis in Harald Lander's ballet Thorvaldsen. He was taken permanently into the company in 1947 at the age of eighteen. Bruhn took the first of his frequent sabbaticals from the Danish company in 1947, dancing for six months with the short-lived Metropolitan Ballet in England, where he formed his first major partnership, with the Bulgarian ballerina Sonia Arova. He returned to the Royal Danish Ballet in the spring of 1948 and was promoted to soloist in 1949, the highest level a dancer can attain in the Danish ballet. Later in 1949, he again took a leave of absence and joined American Ballet Theatre in New York, where he would dance regularly for the next nine years, although his home company continued to be the Royal Danish Ballet.

The turning point in Bruhn's international career came on May 1, 1955 with his début in the role of Albrecht in Giselle partnering Dame Alicia Markova, nearly twenty years his senior, in a matinée with Ballet Theatre in New York after only three days of rehearsal.[3] The performance caused a sensation. Dance critic John Martin, writing in the New York Times, called it "a date to write down in the history books, for it was as if the greatest Giselle of today were handing over a sacred trust to what is probably the greatest Albrecht of tomorrow." In an article entitled “The Matinée that Made History” in Dance News in June 1955, P.W. Machester wrote:

Technically exacting as it is, the role of Albrecht is not beyond the capabilities of any competent premier danseur, and Erik Bruhn is infinitely more than that; he is probably the most completely equipped male dancer of the day, with the flawlessly clean technique that comes only through a combination of enormous talent allied to correct day-by-day training from childhood … If his dancing was magnificent, and it was, his partnering of and playing to Markova were no less so. The result was one of those electrifying performances when everyone both in the audience and on the stage is aware that something extraordinary is happening.

Bruhn formally resigned from the Danish ballet in 1961, by which time he had become internationally known as a phenomenon, although he continued to dance periodically with the company as a guest artist. In May 1961, he returned to Ballet Theatre for its New York season. In its May 5 issue, Time magazine published a major article on the dancer and his art:

Back home Bruhn, 32, is the idol of the Royal Danish Ballet, where he has brought new life to the classic roles reserved for a premier danseur noble. His technical credentials include a fine dramatic sense and an ability to leap with a high-arching grace, to turn with cat quickness and fluidity on the ground or in midair, to project emotion with vivid movements of arms, legs and body. But Bruhn long ago became aware that "technique is not enough," and he is remarkable for the feeling of tension he can convey by his mere presence. Poised and trim (5 ft. 7 in., 140 lbs.), he somehow rivets an audience with the promise of action before he has danced a step ... As Bruhn soars ever closer to his apogee, he spends restless nights reviewing roles in his mind. He has surprisingly little of the vanity that goads most performers; he does not want audiences to pay, he says, "only to see me jump." Furthermore, he would rather "be bad in a good ballet than be great in a bad ballet." But to be great in a good ballet? To do it, says Erik Bruhn, "it is important, even if you performed a role the night before, to think, 'This is the first time this is going to happen.' "

During the next 10 years, Bruhn formed long relationships as a guest artist not only with Ballet Theatre but with most all of the major ballet companies in Europe and North America, including the New York City Ballet, the Joffrey Ballet, the National Ballet of Canada, the Paris Opera Ballet, and London's Royal Ballet. He was best known for his lead roles in La Sylphide, Giselle, Frederick Ashton's Romeo and Juliet, and Swan Lake. John Cranko made Daphnis and Chlöe on him in 1962 at the Stuttgart Ballet, which Bruhn considered his favorite from amongst the ballets created specifically for him. He was also acclaimed in dramatic roles, such as Jean in Birgit Cullberg's Miss Julie, the Moor in José Limón's The Moor's Pavane, and Don José in Roland Petit's Carmen. In addition to Sonia Arova, Bruhn had significant dance partnerships with a large and unusually varied number of ballerinas: the Americans Cynthia Gregory, Nora Kaye, Allegra Kent, and Maria Tallchief; the Russian Natalia Makarova; the Dane Kirstin Simone; the British Nadia Nerina; and, most famously, with the Italian prima ballerina Carla Fracci.

In his book, Beyond Technique (1968), Bruhn discussed his thoughts on partnering:

It has been noticed that I have been able to work with many different kinds of ballerinas, and on most occasions we succeeded in becoming a team if only for a season or two. And that is because I always wanted to relate to them. I don't remain the same. Each ballerina is different; she has a special flavor or she wouldn't be a ballerina. This would color my style and shape my approach. I remain true to myself, but I let her flavor color me as mine colors her ... A good partnership can somehow crystallize something that you have been doing already. When the right people come together, they bring the right thing out of each other ... With the right person, it becomes a situation of being rather than playing ...The role absorbs you and you become it. And then it seems like you can do nothing wrong because you are so totally absorbed by this being.

Bruhn was made a Knight of the Order of the Dannebrog, one of Denmark's highest honors, in 1963, the same year he was awarded the Nijinsky Prize in Paris. After retiring as a Danseur Noble in 1972, Bruhn danced character roles, such as Madge the Witch in La Sylphide, Dr. Coppelius, and Petrushka. He was director of the Swedish Opera Ballet from 1967 to 1973 and the National Ballet of Canada from 1983 until his death in 1986. Although twice offered the directorship of the Royal Danish Ballet, he twice declined the post. His productions of full-length classical ballets, such as La Sylphide, Giselle, Coppélia, and his somewhat controversial Swan Lake for the National Ballet of Canada, were well received, as were his stagings of pas de deux from the Bournonville repertoire. A superb teacher and coach, Bruhn was dedicated to imparting purity of form and dance as drama not spectacle. He believed in "complete identification" with the character being portrayed, "but under complete control. Because if you lose yourself completely, you cannot communicate. In 1974, he played a leading role in the stage play Rashomon with Susse Wold in Denmark, for which he won acclaim.

Bruhn met Rudolf Nureyev, the celebrated Russian dancer, after Nureyev defected to the West in 1961. Nureyev was a great admirer of Bruhn, having seen filmed performances of the Dane on tour in Russia with American Ballet Theatre, although stylistically the two dancers were very different. Bruhn became the great love of Nureyev's life and the two remained close for 25 years, until Bruhn's death.

Erik Bruhn died in Toronto General Hospital on April 1, 1986 at the age of 57. His death was attributed to lung cancer. However, according to Pierre-Henri Verlhac, he might have died of AIDS. He is buried in an unmarked grave at Mariebjerg Cemetery in Gentofte, an affluent northern suburb of Copenhagen, near the house where he grew up.

Dance critic John Rockwell, in his obituary of Bruhn, noted:

Mr. Bruhn was valued more as an epitome of manly elegance and for the sensitivity of his acting than as a virtuoso technician. As a partner he was grave and deferential, yet he never subsided meekly into the background. And as a poetic actor, he lifted male leading roles in the classic ballets to a new prominence ... Mikhail Baryshnikov [said] "He was indisputably one of the greatest dancers we have ever seen, and his dignity and style have been a model to us all, which can not be replaced."

Clive Barnes had named Erik Bruhn "the greatest male classical dancer of his time" when Bruhn retired in 1972. In an appreciation of Bruhn's accomplishments published in The New York Times shortly after his death, dance critic Anna Kisselgoff said:

He was, then, the model of perfection as a dancer - precise in every step, beautifully placed, a virtuoso technician, noble in bearing, elegant in every gesture. His line was extraordinary, his leg beats - a legacy of his Danish training - amazing. He was one of the few dancers who could bring the house down simply by executing a series of entrechats as James in La Sylphide. The steps, no matter how brilliantly executed, were always part of a deeper concept, part of a characterization. Erik Bruhn was a complete dancer - a far cry from the highly specialized artist he was often made out to be ... His moral example to the rest of ballet came through the concentration and seriousness with which he committed himself to every role.

In a codicil to his will, Bruhn left part of his estate for the establishment of The Erik Bruhn Prize, recognizing dancers from the three companies with which he was most closely associated: the Royal Danish Ballet, American Ballet Theatre, and the National Ballet of Canada, each of which are invited to send one male and one female dancer to the competition, held in Toronto, Canada. Bruhn specified that the prize be awarded to two young dancers who "reflect such technical ability, artistic achievement and dedication as I endeavored to bring to dance." Competitors for the prize are between the ages of 18 and 23 and are selected by their respective Artistic Directors. For the competition, each dancer performs in a classical pas de deux and variations and a contemporary pas de deux or solo work. The first Erik Bruhn Prize was awarded in 1988.

Bruhn authored Beyond Technique with photos by Fred Fehl (1968, reissued as No. 36 of "Dance Perspectives" in 1973), and with Lillian Moore he co-authored Bournonville and Ballet Technique: Studies and Comments on August Bournonville's Etudes Choregraphiques (1961, reprinted 2005). He was the subject of the book Erik Bruhn: Danseur Noble (1979) by John Gruen, written with his cooperation and based in part on extensive interviews. A 2008 biography in Danish by Alexander Meinertz, Erik Bruhn - Billedet indeni (The Picture Within), has yet to be translated into English.

Bruhn was posthumously recognized in 1987 for "exemplary contributions to Canada and its culture" as the first recipient of the annual Pagurian Award for Excellence in the Arts.