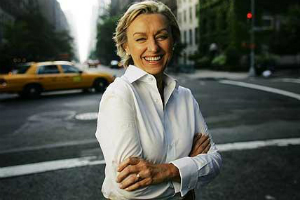 British-American editor known as irreverent, witty, sophisticated and bright. She grew up outside of London with a dad and older brother who are film producers, and a mom who was gossip columnist Bettina Brown. She and her older brother, Christopher, grew up in an upper-middle-class family in Little Marlow, in Buckinghamshire, on the outskirts of London. An angelic little girl, at parties she could always be found sitting on the lap of the most important man in the room. She was a shy, observant child, pretty, funny, feminine and an instigator. By 16, she had been expelled from three schools.

While reading English at Oxford, she won the Sunday times Drama Award in 1973. In 1978, Brown was named Britain's Young Journalist of the Year. She was the youngest editor in London at 25 when she took over "The Tatler" in June 1979, a stilted upper-class publication that she converted into a gossipy monthly. Her sorcery metamorphosed the Tatler "from a jowly dowager into a flirty stunner."

On 1/01/1984, Brown was hired as editor of "Vanity Fair" in New York City. With a definitive editorial stance, she aided in the success of the magazine, increasing circulation 400% in two years. She was named Magazine Editor of the Year in 1988. Her success has been attributed to her creative drive plus a clairvoyant sense of timing that borders on crystal-ball prescience.

She moved in with Harold Evans, 50, in 1978 (after first meeting four years prior); they married on 8/20/1981. Their courtship had begun in London when he was editor of the Sunday Times, winning awards for disclosure on thalidomide, and she was editor of the Tatler. She told a reporter, "My God, I was in love immediately. He was the sexy editor of all time . . . the Nijinsky of newsprint." They planned to move to America in 1984 so that he could teach at Duke University. Then Tina was offered the editorship of Vanity Fair. Over the next eight years, she specialized in glamorous culture shock, including the Vanity Fair cover showing Roseanne and Tom Arnold mud-wrestling in 1990 and a nude, pregnant Demi Moore in 1991. Thus, when it was announced that she would take over the New Yorker in 1992, Manhattan reeled. Brown took her creative drive and great sense of timing on to the "New Yorker" in 1995. She hired younger, faster writers, paid them well and pushed them hard to produce the kinds of news-driven stories she wanted. She also ousted many of the old writers, at least one of whom called her Joseph Stalin in high heels. Others claimed that she was vulgarizing the magazine. Circulation, nonetheless, climbed steadily.

In America, her husband became a publisher with Random House in 1990. Separately, each commanded Manhattan attention; together, they are somewhat of an obsession among the literary cognizanti. Even though they mingle weekly with movie stars, political bigwigs and New York celebrities, they reject the notion that they are among New York's premier socializers. Whenever possible, they are home with their two youngsters, limiting their starry evenings to two a week. Their son George Frederick was born in January 1986 and daughter Isabel Harriet in October 1990.

People remark on Brown's resemblance to Princess Diana, and she has also been compared to Clare Boothe Luce, whose colleagues described in 1934 as melding "a fragile blondness with a will of steel." Shy by nature, she goes to parties as a journalist, to meet and talk with people in the writing business. Her passion is high quality literature.

On 7/08/1998, Brown stunned the publishing world by unexpectedly resigning after six years as editor of the New Yorker magazine. Although the New Yorker has won many awards under Brown, it continued to bleed red ink for its parent company, Conde Nast Publications. Bought for $168 million in 1985, it has had total losses of $175 million since then. When offered a five-year contract, Brown opted for an equity stake in a new venture.

She had joined Miramax Films as chair of the maverick independent movie distributor owned by Disney. The venture will begin with publication of a monthly, unnamed magazine, and Brown will appear on some four planned TV specials. The magazine will provide a base for other projects, including movies, TV and books. Her husband, Harry Evans, is now vice chairman and editorial director of the Daily News. Her magazine, eventually named "Talk," the general-interest monthly launched two years ago by former Vanity Fair and The New Yorker editor Tina Brown, 48, ceased publication on 1/25/2002, as it was preparing to ship its March issue, "our best ever," Brown said on Monday morning's "Today" show. She said ad projections for the year made continuation impossible, and admitted that the magazine's star-studded launch party (everyone from Madonna to the Clintons gathered on Liberty Island in New York Harbor for the first issue's debut) "may have been too big of a bang."