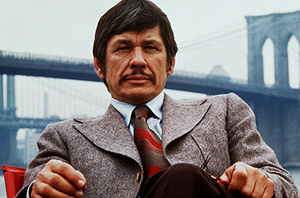 Charles Bronson (born Charles Dennis Buchinsky, November 3, 1921 – August 30, 2003) was an American actor of "tough guy" roles. In most of his roles he starred as a brutal police detective, a western gunfighter, vigilante, boxer or a Mafia hitman.

Early life and World War II service
Bronson was born in the notorious Ehrenfeld, Pennsylvania coal-mining neighborhood of Scooptown in the Pittsburgh Tri-State area. He was one of 15 children born to a Lithuanian immigrant father of Lipka Tatar ancestry, and a Lithuanian-American mother.

Bronson's father died when he was only 10, and he went down to the coal mines like his older brothers until he was drafted. He earned $1 per ton of coal mined. His family was so poor that, at one time, he had reportedly been forced to wear his sister's dress to school because he had no other clothes. This story has been repeated in Celebrity Setbacks: 800 Stars who Overcame the Odds by Ed Lucaire (ISBN 0-671-85031-8) and in an edition of Ripley's Believe It or Not!.

In 1943, Bronson joined the United States Army Air Forces and served in the Pacific theater as a B-29 Superfortress tail-gunner. Assigned to the 61st Bomb Squadron of the 39th Bomb Group of the Twentieth Air Force, flew bombing missions to Japan from North Field, Guam.

Bronson was a descendant of the Lipka Tatars of the Polish-Lithuanian Commonwealth, which caused many people to think that he looked like a Chicano or Mexican-American who was a Mestizo (mixture of Spanish and Indian ancestry). Thus, due to his looks Bronson sometimes played characters who were Mexican or who were part-Indian.

Acting career
After the war, he decided to pursue acting, not from any love of the subject, but rather, because he was impressed with the amount of money that he could potentially make in the business. Bronson was roommates with Jack Klugman, another starving actor at the time. Klugman later said of Bronson that he was good at ironing clothes.

During the McCarthy hearings he changed his surname to Bronson as Slavic-sounding names were suspect, taking his inspiration from the Bronson Gate at Paramount Studios, situated on the corner of Melrose Ave. and Bronson St. One of his earliest screen appearances under his new name was as Vincent Price's henchman in the 1953 horror classic House of Wax. His first screen appearance, which was uncredited, was as a sailor in You're in the Navy Now in 1951.

Bronson made several appearances on television in the 1950s and 1960s, including three leading roles on Alfred Hitchcock Presents in the episodes "And So Died Riabouchinska" (1956), "There Was an Old Woman" (1956), and "The Woman Who Wanted to Live" (1962); he also starred alongside Elizabeth Montgomery in The Twilight Zone episode "Two" (1961).

From 1958 to 1960, Bronson starred in the ABC detective series Man With A Camera. Bronson portrayed 'Mike Kovac', a former combat photographer, free-lancing in New York City. Frequently, Bronson's character was involved in assignments for the Police Department, which commonly put Bronson's character in danger. Also on ABC, Bronson gained attention in 1963 in the role of Linc, the stubborn wagonmaster in the TV western The Travels of Jaimie McPheeters, which also starred twelve-year-old Kurt Russell.

Although he began his career in the United States, Bronson first made a serious name for himself acting in European films. He became quite famous on that continent, and was known by two nicknames: The Italians called him "Il Brutto" ("The Ugly One") and to the French he was known as "le sacré monstre" ("holy monster").

Even though he was not yet a headliner in America, his overseas fame earned him a 1971 Golden Globe as the "Most Popular Actor in the World." That same year, he wondered if he was "too masculine" to ever become a star in the United States.

Bronson's most famous films include The Great Escape (1963), in which he played Danny Velinski, a Polish prisoner of war nicknamed "The Tunnel King", and The Dirty Dozen, (1967) in which he played an Army death row convict conscripted into a World War II suicide mission.

In the westerns The Magnificent Seven (1960) and the Sergio Leone epic Once Upon a Time in the West, (1968) he played heroic gunfighters, taking up the cause of the defenseless. Sergio Leone once called him "the greatest actor I ever worked with." Leone had wanted Bronson for all three of what became known as the "Man with No Name" trilogy, but Bronson turned him down each time. In Hard Times (1975), he played a street fighter making his living in illegal boxing matches in Louisiana.

He is also remembered for Death Wish (1974) which spawned several sequels (also starring Bronson), In Death Wish he played Paul Kersey, a successful New York architect, a liberal until his wife (played by Hope Lange) was murdered and his daughter raped. Kersey became a crime-fighting vigilante by night, a highly controversial role, as his executions were cheered by crime-weary audiences. After the famous 1984 case of Bernhard Goetz, the actor recommended that people not imitate his character.

During the 1980s, Bronson made numerous films with smaller production companies, most notably Cannon Films. Ultra-violent films such as The Evil That Men Do and 10 To Midnight were blasted by critics but provided Bronson with good paying work throughout the 80s. Bronson's last starring role in a theatrically released film was 1994's Death Wish V: The Face of Death.

Bronson was married to British actress Jill Ireland from 1968 until her death from breast cancer at age 54 in 1990. She was his second wife. He met her when she was still married to British actor David McCallum. At the time, Bronson (who shared the screen with McCallum in The Great Escape) reportedly told McCallum: "I'm going to marry your wife." Two years later, Bronson indeed married Jill, and they remained together until her death in 1990.

On August 30, 2003 Bronson died of pneumonia while suffering from Alzheimer's disease at Cedars-Sinai Medical Center, aged 81. He had been in poor health since undergoing hip replacement surgery in August 1998. He was buried in Brownsville, Vermont, near his home of thirty years in West Windsor.

At the time of his death, he was survived by his wife Kim, three children, two stepchildren and two grandchildren. A third stepson, Jason McCallum Bronson, preceded him in death after succumbing to a drug overdose in 1989.

Trivia
Bronson was asked to play the lead in A Fistful of Dollars. Bronson turned down the offer.
Read for the role of the Original 1977 Superman movie which later went to Christoper Reeve. Both Bronson and Reeve would later star together in the movie adaptation of The Sea Wolf 1993.
Was considered for the lead role in The French Connection which later went to Gene Hackman
Considered to play the role of Snake Plisken in the classic Escape From New York but director John Carpenter thought he was to tough looking and too old for the part.
Turned down the part of Billy Madison's father in Billy Madison.
Filmed all of his scenes for The Dirty Dozen in three days
The Canadian thrash metal band Razor dedicated their 1988 album Violent Restitution to Bronson.
A tribute to him was at the end of Kill Bill: Volume 2 in the credits. It says "R.I.P. Charles Bronson"