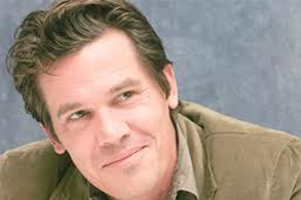 Josh James Brolin (born February 12, 1968) is an American actor. He has acted in theater, film and television roles since 1985. He is known primarily for his roles in the films Thrashin', The Goonies, W., No Country for Old Men, Milk, American Gangster, True Grit, Men in Black 3, and Gangster Squad.

Brolin was born in Santa Monica, California, the son of Jane Cameron Agee, a wildlife activist who was a native of Corpus Christi, Texas, and actor James Brolin. Brolin was raised on a California ranch with little exposure to his father's acting career. His parents divorced when he was 16. His stepmother is singer/actress Barbra Streisand. He became interested in acting after taking an improv acting class in high school.

Brolin started his career in TV movies and guest spots on TV shows before getting a more notable role as Brand Walsh in the Richard Donner-directed movie The Goonies (1985). He was considered for the role of Tom Hanson in the series 21 Jump Street; he and Johnny Depp were the finalists for the role, and at that time the two became close and remained friends even after the role was ultimately awarded to Depp. Brolin guest-starred in an episode of the show in its first season.

Brolin implied that he turned away from film acting for years after the premiere of his second film, Thrashin', where he witnessed what he called "horrendous" acting on his part. For several years, he appeared in stage roles in Rochester, New York, often alongside mentor and friend Anthony Zerbe. One of Brolin's more prominent roles early in his career was that of Wild Bill Hickok in the ABC western TV series The Young Riders, which lasted three seasons (1989–92). Two other TV series he was involved in include the Aaron Spelling production Winnetka Road (1994) and Mister Sterling (2003), both of which were cancelled after a few episodes.

Brolin also starred in another Oliver Stone film in 2008 called W., a biopic about key events in the life of President George W. Bush. Stone pursued an initially hesitant Brolin for the role. He said of his decision to cast Brolin in the leading role:

It always seemed to me that he was the right person. Although classically handsome, I think he would consider himself a character actor first and foremost, and it was in this context that I thought of him as W. Josh certainly has star appeal and could be a leading man, but I don’t think he necessarily wants to be that. I think he really enjoys disappearing into a character.

Brolin received an Oscar nomination for Best Supporting Actor for his role in Gus Van Sant's biopic Milk as city supervisor Dan White, who assassinated San Francisco Supervisor Harvey Milk and Mayor George Moscone. He made news by wearing a White Knot to the Academy Awards ceremony to demonstrate solidarity with the marriage equality movement. Brolin told an interviewer that costar Sean Penn, who portrayed Milk, decided to dispel any nerves the actors had about playing gay men by grabbing the bull by the horns. At the first cast dinner, which included castmates James Franco, Emile Hirsch and Diego Luna, Brolin said, " walked right up and grabbed me and planted a huge one right on my lips." Brolin has received critical acclaim for his performance and, in addition to his Oscar nomination, received NYFCC and NBR Awards for Best Supporting Actor and a nomination for a SAG Award for Outstanding Performance by a Male Actor in a Supporting Role.

He portrayed Jonah Hex in the film of the same name. Brolin played a younger Agent K in Men in Black 3 released in May 2012.

Josh Brolin starred in the film Gangster Squad portraying John O'Mara released in 2013 which was originally scheduled for release in September 2012.

Brolin was a top contender for the role of Batman in Zack Snyder's sequel to the 2013 film Man of Steel, but was overlooked and the role was given to Ben Affleck.

In 2009, Brolin executive produced and performed in The People Speak a documentary feature film that uses dramatic and musical performances of the letters, diaries, and speeches of everyday Americans, based on historian Howard Zinn's A People's History of the United States.

Brolin wrote and directed the short film X, as his directorial debut. The film, about an inmate who escapes prison to reunite with his daughter and search for her murdered mother, was the opening film at the first annual Union City International Film Festival in Union City, New Jersey in December 2010.

During an interview in 2010, Brolin claimed to be a member of punk rock band Rich Kids on LSD in the early 1980s.

Brolin has hosted Saturday Night Live twice; once in October 2008, and again in April 2012.

Brolin was married to actress Alice Adair from 1988 to 1994; they have two children, Trevor Mansur (born June 1988) and Eden (born 1994). He was engaged to actress Minnie Driver for six months. He has been married to actress Diane Lane since August 15, 2004. Brolin and Lane filed for divorce in February 2013.

On December 20, 2004, Brolin's wife, Diane Lane called the police after an altercation with Brolin and he was arrested on a misdemeanor charge of domestic battery. Lane declined to press charges and the couple's spokesperson characterized the incident as a misunderstanding.

When he is not acting, Brolin is an active stock trader and was co-founder of the site MarketProbability.com. The site has since shut down.