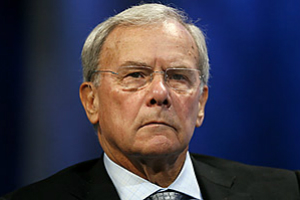 American broadcast journalist and writer, formerly the anchorman of NBC's Nightly News and one-time host of NBC's "Today" show. A self-described political junkie, he earned a degree in political science in 1962, the same year in which he began news casting. Brokaw worked up to multi-million-dollar contracts by the '80s. Boyishly handsome, he is the youngest of three network anchormen with Peter Jennings three years older and Dan Rather eight years older.

The oldest of three sons of an construction engineer and a homemaker, he found his dad a moral force in his life. There was consistency in his parent's example about family and values and "doing the right thing." Brokaw lettered in sports in school and developed legendary drive and ambition, bristling self-confidence, aggressiveness and candor. He credits the Huntley-Brinkley evening news on NBC for igniting his fascination with journalism.

After graduating from the University of South Dakota, he got a news job at the NBC station in Omaha, Nebraska, then moved on to bigger cities, bigger jobs and bigger stories, including the 1968 assassination of Bobby Kennedy in Los Angeles and a summit conference in Moscow. NBC, scouting for talent, plucked him out to host a network magazine show. Nonetheless, it was the White House beat that made Brokaw a nationally recognized figure and led to his stint on the "Today" show and his eventual promotion to the evening news and anchor chair.

For nearly four decades, he has worked on the news beat, overcoming his occasionally sloppy diction, years of shaky ratings and a threatened libel lawsuit from wrongly accused Atlanta Olympics bombing suspect Richard Jewell. In that time he has become one the most trusted faces in TV journalism, known for being morally centered and a decent man.

Brokaw married Meredith Auld, once Miss South Dakota, on 8/17/1962; they have three daughters and live in Manhattan, NY. He considers himself emotional when he's off-camera, particularly when it comes to his family and marriage, which are the center of his life. A hobbyist mountain climber, he is a close friend of Robert Redford.

His first book is a labor of love, "Generation," a collection of some 50 profiles of men and women from the prior generation. Published in December 1998, it rose quickly to the top of the New York Times bestseller list. He has a reported five-year, $35 million contract that will keep him in the NBC anchor chair until 2002.

The anchor stepped down from the anchor desk at NBC's Nightly News on December 1, 2004 after an illustrious career that included 21 years on the job.

Brokaw authored several books, The Greatest Generation" (September 2004) about those who fought in WWII and “Boom! Voices of the Sixties: Personal Reflections on the '60s and Today,” released in early November 2007.

After the death of respected journalist Tim Russert on June 13, 2008, Brokaw took over Russert’s position as temporary host of the weekly TV news show “Meet the Press.” He left the assignment when David Gregory was appointed to the slot.