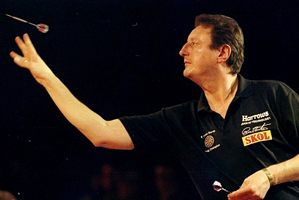 Eric Bristow MBE ("The Crafty Cockney") (born 25 April 1957) is a former professional English darts player, whose skill at the game in the 1980s helped turn it into a worldwide spectator sport.

He is a five times World Champion and is renowned still as one of the 'Biggest ever names in world darts'. Eric does not play competitive darts any more but tours the UK speaking on the after dinner circuit and entertaining audiences on darts exhibitions.

Bristow won his first world championship in 1980, defeating fellow Londoner Bobby George, and so began a decade's worth of domination, in which he would retain his title in 1981 and win it again in 1984, 1985 and 1986. Like his snooker contemporary Steve Davis, however, he had to cope also with a shock defeat during this period, when young unknown Keith Deller beat him in the 1983 final, not to mention Steve Brennan in the previous year's 1st Round. He finished as runner-up on four other occasions up to 1991.

The nickname of the Crafty Cockney was given to Bristow when he visited an English pub of that name in 1976 during a visit to Santa Monica, California. Bristow wore a shirt (which he received from the same pub) depicting a uniformed British policeman, a Union Flag and the title Crafty Cockney whenever he took part in a tournament.

The way players hold a dart when playing the game has no rules nor recommended technique - players grasp a dart simply in the manner with which they feel comfortable. Bristow became known more than other players, however, for his style, which involved the extension of his little finger in a similar manner to the drinking of tea, often but falsely attributed to the English upper class - "me perked up right pinkie" he called it. Yet when he pulled the dart back from aiming position, he circled it with all of his fingers, therefore leading to speculation that the routine with the little finger was worthless to his throw. When asked about it, Bristow admitted the style was "just for show".

Bristow emerged as the most successful and consistent darts player of the 1980s, reigning as number one in the world rankings from 1980 until 1987. He was fortunate to have been around at the right time as television began showing increased interest in the sport in the late 1970s, with the first world championship occurring in 1978. This, allied to the fact that a governing body had been formed in January 1973 and that Bristow had not only supreme talent for one so young but an imposing personality and uncontained self belief, enabled him to make a very successful living.

Cocky and arrogant, he invariably wound opponents up before and during matches with his gamesmanship. Crowds would boo Bristow when he was on stage, no less so than in Scotland, an atmosphere in which he revelled. During the 1982 Arrows Chemicals British International Championship match in Scotland, Bristow was subject to what Darts World Magazine called "the most sustained barrage of jeering witnessed at a Darts match."

During the Swedish Open in the summer of 1987, he found himself unable to let go of his darts properly - a psychological condition known as dartitis, a bit like the yips in golf. It seems, looking back at footage of his career, that it was gradually building up - the fluent throwing action had slowed in the previous year and he certainly struggled in April 1987 in the Nations Cup where he was particularly ragged for England. He was never the same player again but did, incredibly, regain the number one ranking briefly in 1990.

Bristow had come across a raw darts talent in Stoke-on-Trent in the late 1980s and offered him £10,000 to fund his development in the game, on the understanding that the cash would be repaid. The player was Phil Taylor who would go on to usurp his mentor as the greatest darts player ever, with Bristow often on the receiving end of his brilliance.

Bristow's form deteriorated alarmingly in the early 1990s and he was dropped from the Merseyside team (his third county) where he played with his international team mate Kevin Kenny and then the national side. The split within darts - another governing body was formed - saw Bristow become a founding member of the Professional Darts Corporation. At the World Matchplay event in Blackpool, Bristow made six appearances and never managed to win a single match.

His swansong came in a classic semi-final at the 1997 PDC World Championship which he lost, ironically, to his protégé Taylor. Bristow's last appearance came at the World Championships in 2000 - ending his 23 years run of playing in the event and he ceased playing the sport professionally. He now works mainly as a pundit and occasional commentator for Sky Sports during PDC tournaments, whilst continuing to travel and play on the exhibition circuit. Bristow returned to TV screens as a player in 2008 on Setanta Sports to compete in the BetFred League of Legends tournament, beating Bobby George in the opening match 7-5. No longer the great player he once was, Bristow failed to maintain his form, and didn't win another match in the tournament, failing to qualify for the semi-finals and finishing bottom of the League of Legends table. In 2004 Eric Bristow played John Lowe in the 2004 showdown we saw glimps of Eric Bristow's Old Form he won that match 6-1 in legs.

Following the success of the League of Legends on Setanta, Bristow, John Lowe and Bobby George joined with comedian Duncan Norvelle, who hosted and presented a 2009 Theatre tour of the UK and Ireland.