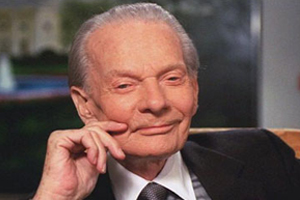 American TV news correspondent best known as the partner of Chet Huntley on the popular and award-winning NBC-TV show, "Huntley Brinkley Report," 1956-1970. Actually, the show faltered at first as the two men learned to pace themselves and with TV technology such that background pillars appeared to be growing out of Huntley's head. By the late '50s the show had found its footing and began to win its audience. Viewers liked the way basso straight man Huntley contrasted with the often witty Brinkley and their closing lines became part of their image; "Good night Chet," "Good night David," and "Good night for NBC News.

Brinkley has covered the presidential conventions since 1952. He is also known for "NBC Nightly News" after 1970. Since 1981 he has hosted Sunday mornings on ABC, "This Week with David Brinkley," a perfect vehicle for the autumn of his renowned career. Ever since his partnership with Huntley, who died in 1974, Brinkley has also been regarded by many as the best news writer in the business, packing more information into a hundred words than anyone else could.

Brinkley was the youngest of five kids but essentially an only child, as he came 20 years after his prior sibling. There were tensions at home as his dad, a minor railroad bureaucrat, was also a winemaker and his mom a prohibitionist. On the day that his dad died, by the time the spirit of her husband had departed his mom was pouring the spirits down the sink. David spent a lot of time in the library, a boy who always loved to read.

A high school English teacher suggested journalism as a career. In 1938, Brinkley dropped out of school and took a job at the local paper. After a stateside stint in the Army he worked for United Press in the South. Then in 1943, he was offered a job at CBS and moved promptly to Washington DC. When he arrived at the CBS office, he was refused an interview by the director who said he'd never heard of him. Brinkley sent him a message back to "Go to Hell," walked across to NBC and got a job in one minute. He worked there for 38 years.

Brinkley left NBC in 1981 because of a bitter feud with then president Bill Small over programming decisions, and finally, went to CBS.

A very private man who rarely speaks of his feelings, he has three sons, two of whom are journalists, from a 1946 marriage to former United Press reported Ann Fischer; they divorced after 22 years. In 1972 he married Susan Benfer, 23 years younger and with a young daughter. They have remained very close and she is comfortable and caring with his sons.

An expert woodworker, he also likes shooting pool, horse racing and poker. For many years he has been part of a floating card game in Washington. His first book, "Washington Goes to War," 1988, is the often comic account of a hayseed city suddenly coming of age in the '40s.

Brinkley employs a dry wit and terse style in news analysis. After 50 years as a broadcast journalist, he rails at the corruption of Washington DC with a surprising intensity. With silver hair, a bit bent with age, his voice still has the cadence and lilt that makes politics sound infinitely interesting and absurd. At 76 he has hearing problems and is a veteran of lung surgery. His book, "Everyone is Entitled to My Opinion," 1996, is a collection of Brinkley's homilies that come at the end of each Sunday show. His autobiography came out last year with the all-encompassing title," David Brinkley: 11 Presidents, 4 Wars, 22 Political Conventions, 1 Moon Landing, 3 Assassinations, 2,000 weeks of News and Other Stuff on Television and 18 Years of Growing Up in North Carolina."

Brinkley ended his 54-year career as a broadcast-journalist on 9/28/1997 when he retired from "This Week with David Brinkley," which ran for over 15 years on ABC.

The award-winning reporter and news commentator once remarked that he had "done the news longer than anyone on earth." David died on June 11, 2003 at his home in Houston, TX.