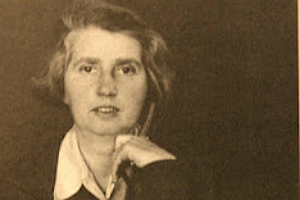 Dorothy Brett (10 November 1883 – 27 August 1977) was a British painter, remembered as much for her social life as for her art. Born into an aristocratic British family, she lived a sheltered early life. During her student years at the Slade School of Art, she associated with the Bloomsbury group. Among the people she met was novelist D. H. Lawrence, and it was at his invitation that she moved to Taos, New Mexico in 1924. She remained there for the rest of her life, becoming an American citizen in 1938.

Her work can be found in the Smithsonian American Art Museum in Washington D.C., in the Millicent Rogers Museum and the Harwood Museum of Art, both in Taos, at the New Mexico Museum of Art, Santa Fe, the Roswell Museum and Art Center, Roswell, New Mexico and in many private collections.

Early life in the UK

Dorothy Brett and her sister had an extremely sheltered childhood (Dorothy not becoming aware of the facts of life until she was 30 years old). Their father, Reginald Balliol Brett (from 1899 Lord Esher), was a Liberal Party politician who became influential at the court of Queen Victoria at Windsor Castle, where the girls attended dancing classes with Princess Beatrice's children, overseen by the Queen. The family lived near Windsor and had homes in London and at Callander in Perthshire, Scotland, where Dorothy spent days fishing in the River Teith and nearby Loch Lubnaig. Dorothy recounted in later life that a friend of her father (apparently Lewis Harcourt, later Lord Harcourt) attempted to sexually assault her when aged about 14-15, an experience to which she attributed her later fear and distrust of men.

However, as noted by a New Mexico historian, a childhood experience may have influenced her decision to see the American West: "In her childhood, the girl attended the touring Buffalo Bill's Wild West Show. She was thrilled to view a stagecoach chased around the arena by an Indian war party dressed in feathered head gear. Her fascination with American Indians, beginning that day, never left her."

In 1910 Dorothy enrolled at the Slade School of Art where she studied until 1916, and began to be known by her surname only. Along with other female art students there she had her hair cut short (for the time) in a style that led Virginia Woolf to call them 'cropheads'. Through fellow student Mark Gertler, she met Lady Ottoline Morrell and began mixing in an artistic and literary circle that included Clive Bell, Bertrand Russell, D. H. Lawrence, Virginia Woolf, Augustus John, Aldous Huxley, Gilbert Cannan, and George Bernard Shaw. Her sister Sylvia became Ranee of Sarawak.

After visiting Taos for the first time in 1923 at the invitation of Mabel Dodge Luhan and then returning to London, D. H. Lawrence held a dinner party at the Cafe Royal (which he called "The Last Supper"). There he tried to recruit friends to move to Taos in order "to create a utopian society he called 'Rananim'", an idea which he had first proposed in a letter of 3 January 1915. While almost all who attended had "agreed to follow Lawrence to New Mexico....when it came to the actual packing for departure, there was only one recruit - the Honorable Dorothy Brett".

In March 1924 Lawrence, Frieda Lawrence, and Brett arrived in Taos and stayed with Luhan. Initially, they all got along well, "but tensions gradually built... (and) Mabel, in a burst of generosity (and probably to keep Lawrence in Taos) offered Lawrence a tract of 160 acres on her ranch" located some twenty miles North-West of Taos. The Lawrences first named it the "Lobo Ranch" and then the "Kiowa Ranch", while today it has been known as the D. H. Lawrence Ranch ever since it was acquired by the University of New Mexico in the 1950s.

Lawrence refused Luhan's offer, but it was accepted by Frieda and the deed was in her name. After some renovations, the trio settled at the ranch in May/June 1924 and Brett took the smaller of the two cabins on the property. She spent much of her time there painting "or she would assist Lawrence by typing his manuscripts," among which were St Mawr and The Woman who Rode Away.

Among Brett's accomplishments when living with the Lawrences were her "exceptional.. handyman skills, including carpentry", but "the three women — Frieda, Mabel and Brett — competed for D.H. Lawrence's attention (and) the rivals often got along fairly well with one another, but sometimes not". Early in 1926 Brett and the Lawrences met again on Capri. From there D. H. Lawrence and Brett travelled to Ravello, where they stayed together for ten days, while Frieda remained on Capri.

After the Lawrences left New Mexico in 1925 and his death in 1930, Simmons notes that:

Brett remained alone on the ranch before moving into Taos. There she lived in poverty for several years, in one case obliged to share an outhouse in winter with neighbor and author Frank Waters. She managed to survive by selling her paintings of Pueblo Indians, cranked out for the tourist market at give-away prices. In time, though, her art took on a mystical quality and began to be snapped up by museums around the country.

She became a United States citizen in 1938. In later life she became admired as one of the leading personalities of Taos. Living alone in her small home outside of town, she was fawned on by the Taos elite during infrequent visits to town. One close friend was Navajo artist R.C. Gorman.