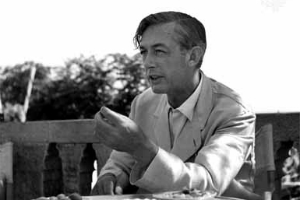 Robert Bresson (25 September 1901 – 18 December 1999) was a French film director known for his spiritual, ascetic and aesthetic style. He contributed notably to the art of film and influenced the French New Wave. He is often referred to as the most highly regarded French filmmaker after Jean Renoir. Bresson's influence on French cinema was once described by Jean-Luc Godard, who wrote "Robert Bresson is French cinema, as Dostoevsky is the Russian novel and Mozart is the German music."

Bresson was born at Bromont-Lamothe, Puy-de-Dôme, the son of Marie-Élisabeth (née Clausels) and Léon Bresson. Little is known of his early life, and the year of his birth – 1901 or 1907 – varies depending on the source. He was educated at Lycée Lakanal in Sceaux, Hauts-de-Seine, close to Paris, and turned to painting after graduating. Three formative influences in his early life seem to have a mark on his films - Catholicism, art and his experiences as a prisoner of war. On his beliefs, Bresson had called himself a "Christian atheist".

Initially also a photographer, Bresson made his first short film, Les affaires publiques (Public Affairs) in 1934. During World War II, he spent over a year in a prisoner-of-war camp - an experience which informs Un condamné à mort s'est échappé ou Le vent souffle où il veut (A Man Escaped). In a career that spanned fifty years, Bresson made only 13 feature-length films. This reflects his meticulous approach to the filmmaking process and his non-commercial preoccupations. Difficulty finding funding for his projects was also a factor.

Bresson's early artistic focus was to separate the language of cinema from that of the theater, which often relies heavily upon the actor's performance to drive the work. With his 'actor-model' technique, Bresson's actors were required to repeat multiple takes of each scene until all semblances of 'performance' were stripped away, leaving a stark effect that registers as both subtle and raw, and one that can only be found in the cinema. Some feel that Bresson's Catholic upbringing and belief system lie behind the thematic structure of most of his films. Recurring themes under this interpretation include salvation, redemption, defining and revealing the human soul, and metaphysical transcendence of a limiting and materialistic world. An example is his 1956 feature A Man Escaped, where a seemingly simple plot of a prisoner of war's escape can be read as a metaphor for the mysterious process of salvation.

Bresson's films can also be understood as critiques of French society and the wider world, with each revealing the director's sympathetic if unsentimental view on its victims. That the main characters of Bresson's most contemporary films, L'Argent and The Devil, Probably (1977), reach similarly unsettling conclusions about life indicates to some the director's feelings towards the culpability of modern society in the dissolution of individuals. Indeed, of an earlier protagonist he said, "Mouchette offers evidence of misery and cruelty. She is found everywhere: wars, concentration camps, tortures, assassinations." In 1975, Bresson published Notes sur le cinématographe (also published in English translation as Notes on the Cinematographer), in which he argues for a unique sense of the term "cinematography." For Bresson, cinematography is the higher function of cinema. Whereas a movie is in essence "only" filmed theatre, cinematography is an attempt to create a new language of moving images and sounds.

Bresson is often referred to as a patron saint of cinema, not only for the strong Catholic themes found throughout his oeuvre, but also for his notable contributions to the art of film. His style can be detected through his use of sound, associating selected sounds with images or characters; paring dramatic form to its essentials by the spare use of music; and through his infamous 'actor-model' methods of directing his almost exclusively non-professional actors. He has influenced a number of other filmmakers, including Andrei Tarkovsky, Michael Haneke, Jim Jarmusch, the Dardenne brothers, Aki Kaurismäki, and Paul Schrader, whose book Transcendental Style in Film: Ozu, Bresson, Dreyer includes a detailed critical analysis. Andrei Tarkovsky held Bresson in very high regard, noting him and Ingmar Bergman as his two favourite filmmakers, stating "I am only interested in the views of two people: one is called Bresson and one called Bergman". In his book, Sculpting in Time, Tarkovsky describes Bresson as "perhaps the only artist in cinema, who achieved the perfect fusion of the finished work with a concept theoretically formulated beforehand."

Bresson's book Notes on the Cinematographer (1975) is one of the most respected books on film theory and criticism. His theories about film greatly influenced other filmmakers, such as the French New Wave directors.

Opposing the established pre-war French Cinema (Tradition de la Qualité) by offering his own personal responses to the question ‘what is cinema?’, and by well-formulating his ascetic style, Bresson gained a high position among Founders of the French New Wave. He is often listed (along with Alexandre Astruc and André Bazin) as one of the main figures who theoretically influenced the French New Wave. New Wave pioneers often praised Bresson and posited him as a prototype for or precursor to the movement. It must be ceded, however, that Bresson was neither as overtly experimental nor as outwardly political as the New Wave filmmakers, and also that his religious views (Catholicism and Jansenism) would not be attractive to most of the filmmakers associated with the movement.

In his development for Auteur Theory, François Truffaut lists Bresson among the few directors that the term "Auteur" can genuinely be applied to, and later names him as one of the only examples of directors who could approach even the so-called "unfilmable" scenes, using the film narrative at its disposal. Jean-Luc Godard also looked back at Bresson with high admiration, comparing his position in French Cinema with that of Dostoevsky in Russian Literature and Mozart in German Music (“Robert Bresson is French cinema, as Dostoevsky is the Russian novel and Mozart is the German music.") Screenwriter and director Alain Cavalier describes Bresson's role as pivotal not only in the New Wave movement, but for French Cinema in general, writing, "In French cinema you have a father and a mother: the father is Bresson and the mother is Renoir, with Bresson representing the strictness of the law and Renoir warmth and generosity. All the better French cinema has and will have to connect to Bresson in some way."

"My movie is born first in my head, dies on paper; is resuscitated by the living persons and real objects I use, which are killed on film but, placed in a certain order and projected on to a screen, come to life again like flowers in water." -Robert Bresson

"The most ordinary word, when put into place, suddenly acquires brilliance. That is the brilliance with which your images must shine."

"Cinema, radio, television, magazines are a school of inattention: people look without seeing, listen in without hearing." -Robert Bresson

"Don't run after poetry. It penetrates unaided through the cracks."