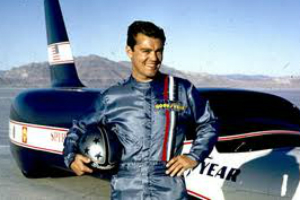 American race car driver who established a new world speed record on 11/15/1965 with a jet powered car at an average speed of 600 mph. Obsessed with wheels from the time he was 12, he had his first hot rod at 14 and was racing drag strips by 16. He was the son of a Hollywood special effects engineer married to a dancer who divorced when he was seven. He himself married at 21 and had three kids.

Breedlove began winning trophies at 17, earning up to some $100,000 a year. A suave Californian with the surfer's glowing good looks, he got the record to 600.6 mph in 1965. It was five years before the record was broken, by Gary Gabelich, who went 622.4 mph, and 13 more years before Richard Noble of Great Britain hit the standing mark of 633.5 mph.

After he left the land-speed-record business in 1975, Breedlove became a race-car builder, sold Southern California real estate and had a partnership in two tennis centers. Going fast is not much of a capitalist venture, as a matter of fact, eats up money faster than gasoline. The poster boy for backyard mechanics everywhere, he designs and drives by experience, and still hopes to beat the speed of sound.

Breedlove was married from August 1955 to 1961; three kids. He was married for the second time on 6/10/1962 to a fellow racer with two kids, and as a triumph of hope over experience, another two times before he got it right.