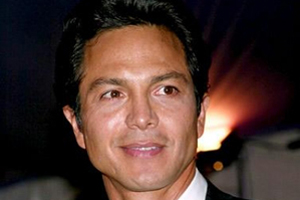 Early life
Bratt was born in San Francisco, California, the son of Eldy (née Banda), a nurse, and a father who was a sheet metal worker. Bratt's father was an American of German and English descent and his mother is a Quechua Native American activist; she was born in Lima, Peru and moved to the U.S. at age fourteen. Bratt's paternal grandfather, George Cleveland Bratt, was a Broadway actor.

In San Francisco, California, Bratt attended Lowell High School, where he developed his dramatic and oratory skills as a member of the Lowell Forensic Society. Bratt went on to earn a B.F.A. at the University of California, Santa Barbara where he also joined Lambda Chi Alpha Fraternity. Although accepted into the M.F.A. program at the American Conservatory Theater, San Francisco, California, he left before receiving his degree to star in the television series, Juarez, which never aired. His brother, Peter Bratt, wrote and directed Follow Me Home, casting Benjamin as Abel.

Career
Bratt's best-known role was that of Det. Rey Curtis on the television show Law & Order. In 1999, he was nominated for an Emmy Award for Outstanding Supporting Actor in a Drama Series for his work on the series. His more popular films include Miss Congeniality, Blood in Blood out and Traffic.

As a child, Bratt's mother took Bratt along with his siblings to participate in the 1969 Native American occupation of Alcatraz. Today Bratt is an active supporter of Native American causes such as the American Indian College Fund.