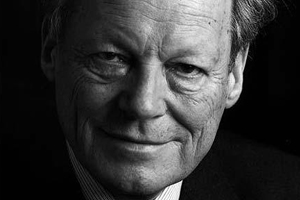 German politician, the Chancellor of West Germany from 1969-1974. He was awarded the Nobel Peace Prize in 1971.

From humble beginnings as the illegitimate son of a Lubeck shopgirl, Brandt took the name of a compatriot German who offered him his papers in order to escape the Gestapo. His biological father was a Hamburg bookkeeper named John Moller, who lived until 1958 but never met his famous son.

He grew up in the labor movement and the Social Democratic Party (SPD), a hard-drinking man often beset with spells of melancholy. Opposing Hitler from the beginning, he was a socialist who rejected communism and a West Berliner who refused to adopt neutrality. He fled to Norway in 1933 where he took citizenship but slipped back into Germany for six months in 1936 to work against Hitler. He then went to Spain as an SPD observer in the civil war. When Norway was overrun by the Germans in WW II, Brandt was imprisoned for a month, then released. He finally returned to Germany in 1946 as a journalist covering the Nuremberg war crimes trials for Scandinavian newspapers.

Brandt regained his German citizenship and by 1957, was elected the Mayor of West Berlin, retaining that post for nine years, leaving in 1966. He preached for a unified Europe all of his life. He was credited with normalizing relationships between West Germany and the Soviet bloc, as well as paving the way for the 1990 unification of Germany, yet Germany's abrupt unification happened more quickly than he ever imagined. During the bitter years of Germany's division, he had supplied his country with its most eloquent moments: standing up to Khrushchev in West Berlin, standing beside JFK at the wall, kneeling in atonement at the site of the Warsaw ghetto, reaching out to the East through Ostpolitik.

In 1974, a close aide, Gunter Guillaume, was identified as an East German spy. At first, Brandt was unconcerned; he thought the security breach was not of any vast importance. But the ensuing scandal drove him from office in despair by May. Out of power after less than five years as West Germany's chancellor, he spent the rest of his life in limbo, in semi-retirement, (suffering a heart attack in 1978.). He remained the Social Democrats' party chairman until 1987 and became a key figure in the months after the collapse of the Berlin Wall in November 1989.

He had a messy private life which he considered no one's business. His memoirs do not mention any of his three wives or four children by name. (A hard drinker who often suffered bouts of melancholy, Brandt grew increasingly depressed.) He divorced his second wife in March 1979 after 31 years of marriage and three sons. (He then married his assistant, appointments secretary, Brigette Seebacher with whom he had been having an affair. She helped him limit his drinking and stop smoking when she accompanied him to a private clinic in the south of France.) If vision, sincerity and personal courage were his great strengths, a taste for the good life, an excessive reliance on advisers and an unbending loyalty to those who served him were weaknesses that eventually ended his career.