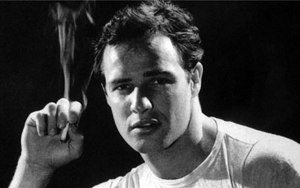 Brando is best known for his roles in A Streetcar Named Desire and On the Waterfront, both directed by Elia Kazan in the early 1950s, and his Academy-Award winning performance as Vito Corleone in The Godfather and as Colonel Walter E. Kurtz in Apocalypse Now.

The latter two directed by Francis Ford Coppola in the 1970s. His acting style, combined with his public persona as an outsider uninterested in the Hollywood of the early 1950s, had a profound effect on a generation of actors including Jack Nicholson, Robert De Niro, Paul Newman, Al Pacino, Robert Duvall, James Dean, Dustin Hoffman, Russell Crowe, Sean Penn, Adrien Brody, Edward Norton, Leonardo DiCaprio and Johnny Depp. Brando was also an activist, lending his presence to many issues, including the American Indian Movement. He was named the fourth Greatest Male Star of All Time by the American Film Institute.

Brando used his Stanislavski System skills for his first summer-stock roles in Sayville, New York on Long Island. His behavior got him kicked out of the cast of the New School's production in Sayville, but he was discovered in a locally produced play there and then made it to Broadway in the bittersweet drama I Remember Mama in 1944. Critics voted him "Broadway's Most Promising Actor" for his role as an anguished veteran in Truckline Café, although the play was a commercial failure. He achieved real stardom, however, as Stanley Kowalski in Tennessee Williams' play A Streetcar Named Desire in 1947, directed by Elia Kazan. Brando sought out that role, driving out to Provincetown, Massachusetts, where Williams was spending the summer, to audition for the part. Williams recalled that he opened the screen door and knew, instantly, that he had his Stanley Kowalski. Brando's performance revolutionized acting technique and set the model for the American form of method acting. This type or role was never seen before and all similar roles mirror Brando's.

Afterward, Brando was asked to do a screen test for Warner Bros. studio. The screen test appears as an extra in the 2006 DVD release of A Streetcar Named Desire.

Brando's first screen role was as the bitter paraplegic veteran in The Men in 1950. True to his method, Brando spent a month in bed at a veterans' hospital to prepare for the role.

He made a much stronger impression the following year when he brought his performance as Stanley Kowalski to the screen in Kazan's adaptation of Streetcar in 1951. He was nominated for an Academy Award for Best Actor for that role, and again in each of the next three years for his roles in Viva Zapata! in 1952, Julius Caesar in 1953 as Marc Antony, and On the Waterfront in 1954. These first five films of Brando's career featured performances of monumental proportions and essentially set a new standard not just for all other actors but also for Brando himself.

In 1953, he also starred in Lee Falk's play Arms and the Man. Falk was proud to tell people that Marlon Brando turned down an offer of $10,000 per week to act on Broadway, in favor of working on Falk's play in Boston. His Boston contract was less than $500 per week. It would be the last time he ever acted in a stage play.

Brando became a hero for the younger generation by playing motorcycle rebel Johnny Strabler in the movie The Wild One. He created the rebel image for the rock-and-roll era. Many rock-and-rollers like Elvis Presley imitated Brando's look and character. Elvis took it to another level by bringing the rebel image to the rock-and-roll fans. Elvis also copied Brando's role as Johnny while playing Vince in his 1957 movie Jailhouse Rock. Brando's explosive screen presence exuded a raw sexuality that drew repeat ticket purchases among female theater goers of all ages. Theater managers related accounts of sold out weekday matiness where small children ran up and down the aisle making motorcycle noises while their mothers sat transfixed.

Marlon Brando was known to be a hero for James Dean, who was said to have idolized him and copied his acting and persona.

However, this has been proved to be untrue by people who knew the two actors.

William Bast, a famous screen writer at that time, compared Marlon's acting style to be "heavy as lead" while James was more "mercurial and light".

Director Nick Ray even took the gang image from the movie The Wild One and brought it to his movie, "Rebel Without A Cause", and thus emphasized Brando's effect on the youth.

All the rebel culture that included motorcycle, leather jackets, jeans and the whole rebel image, that inspired generations of rebels, came thanks to the movie The Wild One and Brando's own unique image and character. The sales of motorcycle related paraphernalia, leather jackets, jeans, boots and Tee shirts skyrocketed throughout the country. The film had a similar effect on overseas audiences and local authorities and religious figures lamented the effect it was having on the youth of their respective countries.

Brando as Terry Malloy in On the WaterfrontUnder Kazan's direction, and with a talented ensemble around him, Brando finally won the Oscar for his role of Terry Malloy in On the Waterfront. Brando claimed that he had improvised much of his dialogue with Rod Steiger in the famous, much-quoted scene with him in the back of a taxicab ("I could have been a contender"). Kazan disputed this.

Brando followed that triumph by a variety of roles in the 1950s that defied expectations: as Sky Masterson in Guys and Dolls, where he managed to carry off a singing role; as Sakini, a Japanese interpreter for the U.S. Army in postwar Japan in The Teahouse of the August Moon; as an Air Force officer in Sayonara; and a Nazi officer in The Young Lions. While he won an Oscar nomination for his acting in Sayonara, his acting had lost much of its energy and direction by the end of the 1950s.

In the 1960s Brando starred in films such as Mutiny on the Bounty (1962); One-Eyed Jacks (1961), a western that would be the only film Brando would ever direct; Reflections in a Golden Eye (1967), portraying a repressed gay army officer; and Burn! (1969), which Brando would later claim as his personal favorite, although it was a commercial failure. Nonetheless, his career had gone into almost complete eclipse by the end of the decade thanks to his reputation as a difficult star and his record in overbudget or marginal movies.

His performance as Vito Corleone in The Godfather in 1972 was a mid- career turning point. Director Francis Ford Coppola convinced Brando to submit to a "make-up" test, in which Brando did his own makeup (he used cotton balls to simulate the puffed-cheek look). Coppola was electrified by Brando's characterization as the head of a crime family, but had to fight the studio in order to cast the temperamental Brando whose reputation for difficult behavior and demands was stuff of backlot legend. Incredibly, the studio suits wanted to give the role to Danny Thomas in the hope that Thomas would have his own production company throw in its lot with Paramount. Thomas had the good sense to decline the role and actually urged the studio to cast Brando at the behest of Coppola and others who had witnessed the screen test. Brando was nothing less than sensational in the role with the "sit down" scene between rival mobsters generally described as one of the greatest moments in film history. Brando won the Academy Award for Best Actor for his performance; once again, he improvised important details that lent more humanity to what could otherwise have been a clichéd role. Brando turned down the Academy Award, the second actor to refuse a Best Actor Oscar (the first being George C. Scott for Patton). Brando boycotted the award ceremony, sending little-known actress Sacheen Littlefeather to state his reasons, which were based on his objections to the depiction of Native Americans by Hollywood and television.

His career afterwards was uneven. He was paid one million dollars a week to play Colonel Kurtz in Apocalypse Now. He was supposed to show up slim, fit, and to have read the book Heart of Darkness. He showed up weighing around 220 pounds and hadn't read Heart of Darkness. This is why his character was shot mostly in the shadows and most of his dialogue was improvised. After his week was over Director Francis Ford Coppola asked him to stay an extra hour to so he could shoot a close up of him saying, "The horror, the horror." Brando agreed for an extra $75,000. After this film his weight began to limit the roles he could play.

Brando also played Jor-El, Superman's father, in the first Superman movie — a role he agreed to only on assurance that he was paid an enormous sum for what amounted to a small part, that he did not have to read the script beforehand and his lines would be displayed somewhere off-camera.

Brando also filmed scenes for the movie's sequel, Superman II, but the producers refused to pay him the enormous percentage he was paid for the first movie, so he denied them permission to use the footage. However, after Brando's death the footage was re-incorporated into the 2006 re-cut of the film, Superman II: The Richard Donner Cut.

Two years after his death, he "reprised" the role of Jor-El in the 2006 "loose sequel" Superman Returns, in which both used and unused archive footage of Brando as Jor-El from the first two Superman films was remastered for a scene in the Fortress of Solitude, as well as Brando's voice-overs being used throughout the film.

Other later performances, such as The Island of Dr Moreau, earned him some of the most uncomplimentary reviews of his career. Despite announcing his retirement from acting in 1980, he subsequently gave interesting supporting performances in movies such as A Dry White Season (for which he was again nominated for an Oscar in 1989), The Freshman in 1990 and Don Juan DeMarco in 1995. He also met and befriended his co-star in that movie, Johnny Depp during filming of it. In 1992 Tim Burton offered Marlon Brando the role of the Penguin in Batman Returns. Brando accepted but Warner Bros. didn't approve. In his last film, The Score (2001), he starred with fellow method actor Robert De Niro.

Brando conceived the idea of a novel called Fan-Tan with director Donald Cammell in 1979, which was not released until 2005. Interestingly, Cammell dated and eventually married the daughter of one of Brando's girlfriends, Anita Loo aka Anita Kong; the daughter being China Kong.