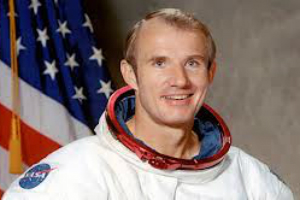 Vance DeVoe Brand (born May 9, 1931) is a former test pilot and NASA astronaut. He served as command module pilot during the first U.S.-Soviet joint space flight in 1975, and as commander of three space shuttle missions.

His flight experience includes 9,669 flying hours, which includes 8,089 hours in jets, 391 hours in helicopters, 746 hours in spacecraft, and checkout in more than 30 types of military aircraft. Vance Brand Airport in Longmont, Colorado, is named in his honor.

Brand was born in Longmont, Colorado, May 9, 1931, and is the son of Rudolph William and Donna Mae Brand. He was active in Troop 64 of the Boy Scouts of America in Longmont, where he achieved Life Scout. He was active in the International Order of DeMolay. He is married to the former Beverly Ann Whitnel, and has two daughters and four sons; Susan Nancy, Stephanie Brand Lowery, Patrick Richard, Kevin Stephen, Erik Ryan, and Dane Vance.

Brand was a commissioned officer and naval aviator with the United States Marine Corps from 1953 to 1957. His military assignments included a 15-month tour in Japan as a jet fighter pilot. Following his release from active duty, Brand continued service in Marine Forces Reserve and Air National Guard jet fighter squadrons until 1966.

Employed as a civilian by the Lockheed Corporation from 1960 to 1966, he worked initially as a flight test engineer on the United States Navy's P-3 Orion aircraft. In 1963, Brand graduated from the United States Naval Test Pilot School and was assigned to Palmdale, California as an experimental test pilot on Canadian and German F-104 programs. Prior to selection to the astronaut program, Brand worked at the West German F-104G Flight Test Center at Istres, France as an experimental test pilot and leader of a Lockheed flight test advisory group.

One of the 19 pilot astronauts selected by NASA in April 1966, Brand initially was a crew member in the thermal vacuum chamber testing of the prototype Command Module (alongside astronauts Joe Engle and Joseph Kerwin) and support crewman on Apollos 8 and 13. Later he was backup command module pilot for Apollo 15, and was likely to be named to the prime crew of Apollo 18 before that mission was canceled. Brand was backup commander for Skylabs 3 and 4. When Skylab 3's CSM had problems with its Reaction Control System, Brand was put on standby to pilot a rescue mission, but was later stood down when it was decided that the problem did not require the rescue mission to be launched. As an astronaut, he held management positions relating to spacecraft development, acquisition, flight safety and mission operations. Brand flew on four space missions; Apollo-Soyuz, STS-5, STS-41-B, and STS-35. He logged 746 hours in space and commanded three missions. Brand was the last member of his astronaut class to remain active with NASA, and was the only Apollo-era astronaut to fly the Space Shuttle in the post-Challenger era.

Brand departed the Astronaut Office in 1992 to become Chief of Plans at the National Aerospace Plane (NASP) Joint Program Office at Wright-Patterson Air Force Base. In September 1994, he moved to California to become Assistant Chief of Flight Operations at the Dryden Flight Research Center, then Acting Chief Engineer, Deputy Director for Aerospace Projects, and Acting Associate Center Director for Programs. He retired from NASA in January 2008.

Brand was launched on his first space flight on July 15, 1975, as Apollo command module pilot on the Apollo-Soyuz Test Project mission. This flight resulted in the historic meeting in space between American astronauts and Soviet cosmonauts. Other crewmen on this nine-day Earth-orbital mission were Thomas Stafford, Apollo commander, Deke Slayton, Apollo docking module pilot; cosmonaut Alexei Leonov, Soyuz commander; and cosmonaut Valery Kubasov, Soyuz flight engineer. The Soyuz spacecraft was launched at Baikonur Cosmodrome, and the Apollo was launched 7½ hours later at the Kennedy Space Center. Two days later, the two spacecraft docked successfully. The linkup tested a unique, new docking system and demonstrated international cooperation in space. There were 44 hours of docked joint activities which included four crew transfers between the Apollo and the Soyuz. Six records for docked and group flight were set on the mission and are recognized by the Fédération Aéronautique Internationale. Apollo splashed down in the Pacific Ocean near Hawaii, on July 25, and was recovered by the USS New Orleans, completing a 217-hour mission. The mission almost ended in disaster when, during the final stages of the mission, the crew was exposed to near fatal amounts of nitrogen tetroxide gas. The reaction control system had been inadvertently left on during descent, and the poisonous fumes were sucked into the capsule as it drew in outside air. Brand briefly lost consciousness and all three crewmen required hospitalization in Hawaii for a number of weeks after landing.

Brand was commander of Space Shuttle Columbia for STS-5, the first fully operational flight of the Space Shuttle program, which launched on November 11, 1982. His crew comprised Colonel Robert Overmyer, pilot, and two mission specialists, Dr. Joseph P. Allen and Dr. William B. Lenoir. STS-5, the first mission with a four-man crew, demonstrated the Shuttle as operational by the successful first deployment of two commercial communications satellites from the Shuttle's payload bay. The mission marked the Shuttle's first use of an upper stage rocket for payloads, the Payload Assist Module (PAM-D). The satellites were deployed for Satellite Business Systems Corporation of McLean, Virginia, and TELESAT of Ottawa, Canada. Two FAI records for mass to altitude were set on the mission. Numerous flight tests were performed to ascertain Shuttle performance. STS-5 was the last flight to carry the Development Flight Instrumentation package to support extensive flight testing. The STS-5 crew concluded the 5-day orbital flight of Columbia with the landing approach through a cloud deck to Runway 22 at Edwards Air Force Base, California on November 16, 1982. Mission duration was 122 hours.

Brand commanded Challenger with a crew of five on the tenth flight of the Space Shuttle program, STS-41-B. The launch was on February 3, 1984. His crew included Commander Robert L. Gibson, pilot, and 3 mission specialists, Captain Bruce McCandless II, Dr. Ronald McNair, and Lt. Col. Robert L. Stewart. The flight accomplished the deployment of two Hughes HS-376 communications satellites which failed to reach desired geosynchronous orbits due to upper stage rocket failures. This mission marked the first flight checkout of the Manned Maneuvering Unit and the Manipulator Foot Restraint with McCandless and Stewart performing two untethered extravehicular activities. Shuttle rendezvous sensors and computer programs were flight-tested for the first time. The 8-day flight of Challenger ended with the first landing to the runway at the Kennedy Space Center on February 11, 1984.

Brand again commanded Columbia on the 38th flight of the shuttle, this time with a crew of seven, on STS-35. The spectacular night launch on December 2, 1990 started a nine-day mission devoted to round-the-clock astronomical observations. Crewmen included the pilot, Col. Guy Gardner; three mission specialists, John M. Lounge, Dr. Robert A. Parker and Dr. Jeffrey A. Hoffman; and two payload specialists, Dr. Samuel T. Durrance and Dr. Ronald A. Parise. The 13-ton payload consisted of the three ASTRO-1 ultraviolet (UV) telescopes and the Broadband X-ray Telescope. More than 200 Orbiter maneuvers were required to point the telescopes. This Shuttle flight, one of the first dedicated to astronomy, provided a rich return of science data with emphasis on observations of very active celestial objects. A night landing was made on December 10, to Runway 22 at Edwards Air Force Base. Mission duration was 215 hours.