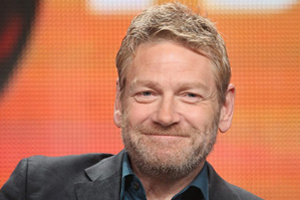 Early life
Branagh was born in Belfast to working-class Protestant parents Frances (Harper), a homemaker, and William Branagh, a carpenter who ran a company that specialised in fitting partitions and suspended ceilings. He was educated at Grove Primary School. At age nine, he relocated with his family to Reading in England to escape the Troubles between Protestants and Catholics.

Career
Branagh achieved some early measure of success in his native Northern Ireland for his role as the title character in the BBC's Play for Today series known as the Billy Plays, written by Graham Reid and set in Belfast. He has worked on both stage and screen. He received initial acclaim in the UK for his stage performances, including the title role in Hamlet. More recently, in 2003, he starred in the Royal National Theatre's production of David Mamet's Edmond.

Branagh is probably best known for his film adaptations of the works of William Shakespeare, beginning with Henry V in 1989, Much Ado About Nothing, Othello, Love's Labour's Lost, Hamlet, with As You Like It following in 2006. His 1996 film version of Hamlet was the first ever to include the complete unabridged text of the play with over four hours and four thousand lines of dialogue.

Branagh has also been involved in several made-for-TV films. Among his most acclaimed portrayals is that of US President Franklin D. Roosevelt (FDR) in the 2005 film Warm Springs. Though the film received sixteen Emmy nominations—winning five—Branagh did not win the award for his nomination. He did, however, receive an Emmy award for his performance in the 2001 TV Conspiracy, a depiction of the Wannsee Conference, where Nazi officials conceived the Final Solution. Branagh's award winning performance was for the part of Reinhard Heydrich.

Branagh has been nominated for four Academy Awards. His first, for direction in the 1992 film Swan Song, two for Henry V (one each for directing and acting), and again for his work on the screenplay of Hamlet in 1996. Included amongst his many other accolades is a nomination for “worst” supporting actor Razzie in 1999 for his performance in the film Wild Wild West. Branagh has co-starred several times with actress Emma Thompson, to whom he was married from 1989 to 1995. They appeared together in Henry V, Much Ado About Nothing, Dead Again, and Peter's Friends. For several years he was in a well-publicised relationship with Helena Bonham Carter, with whom he also starred and directed in Mary Shelley's Frankenstein. In 2003 he married film art director Lindsay Brunnock, to whom he was introduced by Carter in 1997.

In 1990, at age 30, Branagh authored an autobiography, which he entitled Beginning, and has narrated several audio books such as The Magician's Nephew by C.S. Lewis.

In 1994, Branagh declined an appointment as a Commander of the Order of the British Empire (CBE). Branagh was the youngest actor to receive the Golden Quill (also known as the Gielgud Award) in 2000.

Personal life
Branagh is Honorary President of NICVA (the Northern Ireland Council for Voluntary Action.) He received an honorary doctorate in Literature from Queen's University of Belfast in 1990.

Branagh is a patron for the charity Over The Wall, www.otw.org.uk

He speaks Italian and is a lifelong supporter of Tottenham Hotspur Football Club.

Both he and two of his ex-partners Emma Thompson and Helena Bonham Carter have had, or currently have, roles in the Harry Potter movie franchise: Branagh as Gilderoy Lockhart, Thompson as Sybill Trelawney, and Bonham Carter as Bellatrix Lestrange.