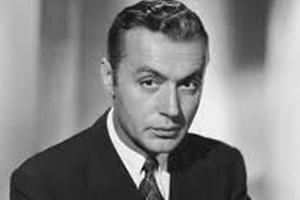 French-American actor on-screen from 1919. He played in his first English-speaking role in 1931. During the '30s and '40s, Boyer was the epitome of continental gallant and suave screen lover, moving gracefully into character roles with age. He was nominated for the Best Actor Oscars for his roles in "Conquest," 1937 "Algiers," 1938 "Gaslight," 1944 and "Fanny," 1961.

Boyer was the only child of Maurice and Louise Boyer. He was a precocious and somewhat introverted child who seemed to interact more easily with adults. When Charles was ten years old, his father died suddenly of a stroke. His mother sold the family business and concentrated on raising her son as a young gentleman. At the age of 11, Charles was taken with the cinema and the theatre. Mme. Boyer tried to dissuade him from this career. Boyer did graduate from the Sorbonne (with a degree in philosophy) before studying acting in Paris. At the age of 21 Boyer debuted in his first leading role on 12 hours notice when the star of the play fell ill. In the 1920s he was the most popular romantic leading man on the Paris stage and was a regular in silent films.

Boyer went to Hollywood at the beginning of the sound era, and his third film, "Private Worlds" in 1935 made him an international star. His notable pictures included "Around the World in 80 Days" in 1956, and "How to Steal a Million" in 1966. During WW II, Boyer became active in cementing Franco-American cultural relation and in 1942 he won a special Academy Award for establishing the French Research Foundation in Los Angeles, the same year that he became an American citizen. In 1951, he was a co-founder with two others of Four Star Television and starred in many of the company’s TV productions.

After his son’s suicide in 1965 he made mainly European films, though he returned to the U.S. to appear in the musical remake of "Lost Horizon" in 1973. He won the New York Film Critics Circle Award for his work in "Stravinsky" in 1974, his final performance.