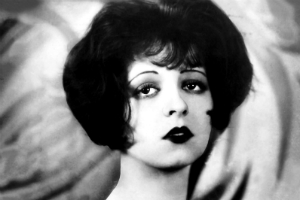 American actress, the hottest Hollywood item in 1927 on and off-screen. She made 12 to 14 one-reelers, a year of silents.

At 16, Bow entered a Motion Picture magazine contest. She hoped to escape her unhappy cold-water tenement through winning the magazine's "Fame and Fortune" trial. In an incredible stroke of luck, she was selected as winner of a trip to Hollywood and a part in an actual motion picture. With her huge plaintive eyes and bow lips, she was a great hit, soon receiving more fan mail per week than was delivered to an average town of 5,000 people. She dominated the fan magazines that had fascinated her a few years before.

Bow worked all day and partied all night. She was known for the quantity of men in her life and for being a manic insomniac. Always on edge, she suffered "little nervous breakdowns" in between pictures, and feverishly burned the candle at both ends. Gary Cooper was wild about her and she helped launch his career in "Wings," the best picture of 1927. Her lovers included her current leading men, John Gilbert, Charles Farrell, Frederic March, Gilbert Roland, Eddie Cantor, and even Bela Lugosi, who kept a nude portrait of Bow after their affair ended.

Clara had a devoted pal and live-in secretary, Daisy DeVoe, a former studio hairdresser. Daisy kept the house running, paid Bow's bills and kept on top of her appointments, sharing everything. One day, Clara discovered that Daisy had also been sharing her bank account, She came up short $35,000 as well as clothing, furs and jewelry, love letters and telegrams. Shocked and hurt, Bow fired Daisy, and Daisy in retaliation, threatened blackmail. Bow's fans knew she was wild but had no idea how many men had shared her sleepless nights. When Bow refused to be coerced, Daisy made good her threat and sold her version of Bow's romantic adventures to the scandal sheets. Bow pressed charges, and DeVoe received an 18-month sentence in jail.

However the damage done was irreparable. Bow's career popularity was short circuited by her scandalous private life of abortions, lawsuits, attempted suicides and nervous breakdowns.

Burned out, Bow collapsed and went into a sanitarium in Glendale, CA. Paramount terminated her contract.

She married cowboy star Rex Bell in 1931 and retired to his ranch; they had two sons together. She attempted a few more films before permanently retiring from the screen in 1933. She and Bell opening the "It" cafe at Hollywood and Vine in 1937, but she never appeared in the popular hangout. She became more matronly while raising her boys, at one time reaching 200 lbs.

Racked with emotional pain, she and Bell separated but never divorced. She became a recluse in a small plain house in a middle-class community of Culver City, CA, close to her doctors.

Bow spent the last 20 years of her life in and out of sanitariums, always an insomniac. She died of a heart attack on 9/26/1965, Glendale, CA.