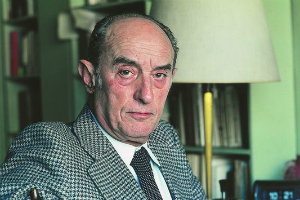 Boulle was an engineer serving as a secret agent with the Free French in Singapore, when he was captured and subjected to two years' forced labour. He used these experiences in The Bridge over the River Kwai, about the notorious Death Railway, which became an international bestseller. The film, named The Bridge on the River Kwai, by David Lean won seven Oscars, and Boulle was credited with writing the screenplay, because its two actual screenwriters had been blacklisted.

His science-fiction novel Planet of the Apes, in which intelligent apes gain mastery over humans, was adapted into a series of five award-winning films that spawned magazine versions and popular themed toys.

Born Pierre-François-Marie-Louis Boulle in Avignon, France, Boulle was baptised and raised as a Catholic, although later in life he was an agnostic. He studied at the prestigious École supérieure d'électricité (Supélec) where he received an engineer's degree in 1933. From 1936 to 1939, he worked as a technician on British rubber plantations in Malaya. While there he met a Frenchwoman who was separated from her husband. She was to become the love of his life, to whom he would write tender love letters. She later chose to return to her husband, an official in French Indochina. During World War II she and her husband escaped into Malaya, but one of her children died in the process. Boulle would later meet her after the war, and they enjoyed a platonic friendship.

At the outbreak of World War II, Boulle enlisted with the French army in Indochina. After German troops occupied France, he joined the Free French Mission in Singapore. During the war he was a supporter of Charles de Gaulle.

Boulle served as a secret agent under the name Peter John Rule and helped the resistance movement in China, Burma, and French Indochina. In 1943, he was captured by Vichy France loyalists on the Mekong River and was subjected to severe hardship and forced labour. He was later made a chevalier of the Légion d'Honneur and decorated with the Croix de Guerre and the Médaille de la Résistance. He described his war experiences in the non-fiction My Own River Kwai. After the war he would keep in touch with his war comrades for the rest of his life.

After the war, Boulle returned to work for a while in the rubber industry, but in 1949 he moved back to Paris and began to write. While in Paris, too poor to afford his own flat, he lived in a hotel until his recently widowed sister, Madeleine Perrusset, allowed him to move into her large apartment. She had a daughter, Françoise, whom Pierre helped raise, but plans for him to officially adopt the girl never materialized.

The Bridge over the River Kwai

While in Paris, Boulle used his war experiences in writing Le Pont de la rivière Kwaï (1952; The Bridge over the River Kwai), which became a multi-million-copy worldwide bestseller, winning the French "Prix Sainte-Beuve". The book was a semi-fictional story based on the real plight of Allied POWs forced to build a 415 km (258 mi) railway that passed over the bridge, and which became known as the "Death Railway". 16,000 prisoners and 100,000 Asian conscripts died during construction of the line. His character of Lt-Col. Nicholson was not based on the real Allied senior officer at the Kwai bridges, Philip Toosey, but was reportedly an amalgam of his memories of collaborating French officers. Both the book and film outraged former prisoners because Toosey did not collaborate with the enemy, unlike the fictional Colonel Nicholson.

David Lean made the book into a motion picture that won seven 1957 Oscars, including the Best Picture, and Best Actor for Alec Guinness. Boulle himself won the award for Best Adapted Screenplay despite not having written the screenplay and, by his own admission, not even speaking English. Boulle had been credited with the screenplay because the film's actual screenwriters, Carl Foreman and Michael Wilson, had been blacklisted as communist sympathizers. Boulle was neither a socialist nor a communist. The Motion Picture Academy added Foreman's and Wilson's names to the award in 1984.

Boulle is said to have given the shortest acceptance speech in Academy Award history, the single word "Merci."

Planet of the Apes

In 1963, following several other reasonably successful novels, Boulle published his other famous novel, La planète des singes, translated in 1964 as Monkey Planet by Xan Fielding, and later re-issued as Planet of the Apes. The book was highly praised and given such reviews as this example from England's Guardian newspaper: "Classic science fiction ... full of suspense and satirical intelligence." In the year 2500, a group of astronauts, including journalist Ulysse Merou, voyage to a planet in the star system of Betelgeuse. They land to discover a bizarre world where intelligent apes are the Master Race and humans are reduced to savages: caged in zoos, used in laboratory experiments and hunted for sport. The story of Ulysse's capture, his struggle to survive, and the shattering climax as he returns to earth and a horrific final discovery is gripping and fantastic. Yet the novel is also a wry parable on science, evolution, and the relationship between man and animal.

In 1968 the book was made into an Oscar-winning film, directed by Franklin J. Schaffner and starring Charlton Heston. The screenplay, originally written by Rod Serling, focused more on action and deviated in many ways from the novel, including the addition of its own classic twist ending that was different from the novel's. It inspired four sequels, a television series, an animated series, a 2001 remake of the original title by Tim Burton, and a 2011 reboot, Rise of the Planet of the Apes, directed by Rupert Wyatt.

Another film adaptation is in production for Boulle's A Noble Profession (Un Métier de Seigneur), a spy thriller partly based on Boulle's real-life experience working as a secret agent during the Second World War. The movie is being produced by Tessa Bell and Andrea Chung.