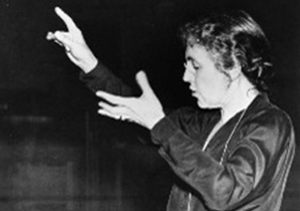 Nadia Boulanger (September 16, 1887 – October 22, 1979) was an influential French composer, conductor, and music professor. An outstanding music educator at the highest level, she taught many of the most important composers and conductors of the 20th century.

Ancestors
Music was in Nadia Boulanger's blood. Her grandmother was the singer Marie-Julie Boulanger. Her grandfather, Frédéric Boulanger won first prize in violoncello in his fifth year (1797) at the then recently founded Paris Conservatoire. Her father, Ernest Boulanger, later studied at the same conservatory (his teachers included Charles-Valentin Alkan), and won the Prix de Rome in 1835. He later taught there, where he met Nadia's mother, the Russian Princess, Raissa Myshetskaya, who was the first music teacher Nadia and her sister ever had.

Biography
Nadia Boulanger was born in Paris. Her emotional life was largely centered around her love for her sister, Lili Boulanger, who was six years younger, and whose care Nadia had been entrusted with by their father. Lili was one of Nadia's first composition students, and it was largely under her guidance that Lili became the first woman ever to win the Prix de Rome, in 1913.

Nadia Boulanger entered the Paris Conservatoire at the age of ten. It was here that she studied organ with Alexandre Guilmant and Louis Vierne. She also studied composition with Gabriel Fauré and Charles-Marie Widor and accompaniment with Paul Vidal. After winning almost every prize available at the conservatory (including organ, accompaniment, and fugue), she won the Deuxième Grand Prix de Rome in 1908, which was a long-term goal of hers. She had tried two times before this, making it to the final round, but not placing. Her composition for the 1908 Grand Prix caused quite a scandal. Instead of the required vocal fugue asked for by the judges, Boulanger composed a string quartet. While some of the judges, including Camille Saint-Saëns, objected, Boulanger was awarded the second place prize. Generally, the runner-up would receive the grand prize the following year, but Boulanger received no such honor; she never competed in the Prix de Rome again.

Nadia and Lili Boulanger had an interesting relationship. While she loved her sister unconditionally, Nadia always felt overshadowed by her sister's compositional abilities. She once said "If there is anything of which I am very sure, it is that my music is useless." Ten years passed between when Nadia Boulanger entered the Paris Conservatoire and when she placed second in the Grand Prix. Lili only spent one year in the conservatory before winning the first place prize with an overwhelming landslide vote. The death of their father in 1900 had been an important factor in Lili’s turn towards composing, and yet, after she died in 1918, Nadia Boulanger never composed again. Lili had asked her to complete her unfinished works, but Nadia did not feel her composing abilities were on par with her sister’s and felt she could not do the compositions justice.

Boulanger's compositional output includes a large number of vocal compositions (including over 30 songs), a number of pieces of chamber music, and a rhapsody for piano and orchestra. The rhapsody, written for Raoul Pugno, with whom she worked for 10 years, underwent so many revisions by Boulanger herself, stemming from her lack of self-confidence and her extreme self-criticism, that it is virtually unplayable now. Together, Boulanger and Pugno completed a song cycle, La heures claires, and an opera, La ville morte. The opera was scheduled to come to the stage in 1914. However, due to Pugno’s death that same year and the beginning of World War I, La ville morte was shelved and was never performed. The entire vocal score and the orchestration of Acts I and III still survive though. Boulanger was heavily influenced by Claude Debussy and her music was often very chromatic, although always based in tonality, as she was highly suspicious of atonal music. Despite this, she was a huge fan of Stravinsky, and conducted the premiere of his concerto Dumbarton Oaks in 1938 in Washington, D.C.

Boulanger, who liked to be known as 'Mademoiselle', made her conducting debut in 1912. She was the first woman to conduct several major symphony orchestras, including the New York Philharmonic, the Boston Symphony Orchestra, the Philadelphia Orchestra, and in England the Hallé Orchestra of Manchester and the BBC Symphony Orchestra. However, she did not put much stock in this as part of reputation.

Her first teaching position was at the Conservatoire Femina-Musica in Paris in 1907. Later, she was one of the first staff members at Alfred Cortot's École Normale de Musique de Paris, beginning in 1920, where she taught a large variety of subjects. After World War I (1921) she was appointed professor of Harmony at the American Conservatory in Fontainebleau, where she was discovered by a new generation of American composers She eventually became its director in 1948. She also taught at the Longy School of Music and the Paris Conservatory. She lived in the United States during World War II and taught at Wellesley College, Radcliffe College, and Juilliard. And even though her eyesight and hearing began to fade towards the end of her life, she worked almost until her death in 1979.

Many of her students from the 1920s, including Aaron Copland, Walter Piston, Roy Harris, and Virgil Thomson, established a new school of composition based on her teaching, and Walter Piston, in addition to his compositions, has produced three superb textbooks, on Harmony, Counterpoint and Orchestration. Virgil Thompson once said that every town in the United States had a post office and a Boulanger pupil. It is probably because of this, and her constant promotion of American music, that she is more valued by composers from outside of France than by those from her native country. Her musical influence was immense throughout most of the Western musical world. She died in Paris.

Boulanger's teaching methods included traditional harmony, score reading at the piano, species counterpoint, analysis, and mastery of sight singing (using fixed-Do solfège). Her students were also expected to memorize Bach's Well-Tempered Clavier Books 1 and 2, and to learn to improvise fugues (as Bach often did). One of her students, Geirr Tveitt, even wrote a minuet in her honor, "minuet for Nadia Boulanger". She also gave the premiere performance of Aaron Copland’s Symphony for Organ and Orchestra.

Students
Here is an incomplete list of her musical students. Neither Boulanger nor Annette Dieudonné, her life-long friend and assistant, kept records of those students who studied with Boulanger. In addition, it is virtually impossible to determine the exact nature of an individual's private study with Boulanger. All in all though, Boulanger is believed to have taught over 600 American composers, in addition to many European composers.