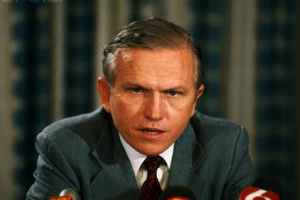 Frank Frederick Borman, II (born March 14, 1928) is a retired NASA astronaut, best remembered as the Commander of Apollo 8, the first mission to fly around the Moon, making him, along with crew mates Jim Lovell and Bill Anders, the first of only 24 humans to do so.

Before flying on Apollo, he set a fourteen-day spaceflight endurance record on Gemini 7, and also served on the NASA review board which investigated the Apollo 1 fire. After leaving NASA, he was the chief executive officer (CEO) of Eastern Air Lines from 1975 to 1986. Borman is a recipient of the Congressional Space Medal of Honor. In the HBO miniseries From the Earth to the Moon, Borman was played by David Andrews.

Borman was born in Gary, Indiana, where the Frank Borman Expressway is named after him. Because he suffered from numerous sinus problems in the cold and damp weather, his father packed up the family and moved to the better climate of Tucson, Arizona, which Borman considers his home town. He started to fly at the age of 15. He is a graduate of the Tucson High School. He graduated from the United States Military Academy in 1950 where he served as an Army Football Manager, and along with part of his graduating class, he entered the United States Air Force (USAF) and became a fighter pilot. He received his Master of Science degree in aeronautical engineering from the California Institute of Technology in 1957. Later, Borman was selected for the Aerospace Research Pilot School and became a test pilot.

Borman was selected by NASA for the second NASA astronaut group in 1962, and was chosen as the Command Pilot for Gemini 7. He was one of just four of this group chosen to command their first Gemini missions, the others being James McDivitt, Neil Armstrong, and Elliot See. (See was killed in a T-38 trainer jet crash three months before his mission. Astronauts Gerald Carr and Joe Engle, selected later, also commanded their first space flights.)

Borman flew Gemini 7 in December 1965 with Pilot James A. Lovell, Jr. This was a long-endurance flight which set a fourteen-day record, and also acted as the target vehicle in the first space rendezvous performed by Gemini 6A. The two craft came within one foot (30 centimeters) of each other and they took turns flying around each other, taking both still and motion pictures.

Borman was selected in late 1966 to command the third manned Apollo mission, planned as an elliptical medium Earth orbit test of the second manned Lunar Module (LM) on the first manned launch of the Saturn V lunar rocket sometime in 1967 or early 1968. But in January 1967, the crew of the first manned Apollo mission, Virgil I. "Gus" Grissom, Ed White, and Roger B. Chaffee were killed in a cabin fire aboard their Apollo 1 Command Module, also designated AS-204.

Borman was chosen as the only astronaut to serve on the AS-204 Accident Review Board, charged with investigating the root causes of the fire and recommending corrective measures. In April 1967, while serving on the board, Borman was one of five astronauts who testified before a United States Senate committee investigating the Apollo 1 fire. His testimony helped convince Congress that Apollo would be safe to fly again.

Borman was then reassigned to his LM test mission, now planned to fly as "Apollo 9" in early 1969 after a first, low Earth orbit LM flight commanded by McDivitt in December 1968. But the LM was not ready for its first flight, leading NASA management to decide to replace Borman's mission with a lunar orbit flight using just the Command/Service Module as Apollo 8 in December, making McDivitt's flight Apollo 9 in March 1969. Borman's "Lunar Module Pilot" (and spacecraft systems engineer) was William Anders. The Command Module Pilot and navigator, Michael Collins, had to have back surgery and was replaced by his backup, James Lovell, reuniting Borman with his Gemini 7 crewmate. Apollo 8 went into lunar orbit on December 24 and made ten orbits of the Moon in 20 hours before returning to Earth.

And, from the crew of Apollo 8, we close with good night, good luck, a Merry Christmas, and God bless all of you—all of you on the good Earth.

The success of Apollo 8 avoided jeopardizing the goal of making the first manned Moon landing by the end of 1969 by not waiting for the delayed LM, and also provided invaluable experience in navigation to the Moon.

Space journalist Andrew Chaikin claims that, following the death of Gus Grissom, Borman became astronaut chief Deke Slayton's choice to command the first Moon landing attempt. In the fall of 1968 Slayton offered command of the first landing to Borman, who turned it down, choosing to retire instead.

In early 1969, Borman became a special advisor to Eastern Airlines and after retiring from NASA and the U.S. Air Force in 1970, he was made Senior Vice President-Operations Group at the airline company. He was later promoted to Executive Vice President-General Operations Manager and was elected to Eastern Airlines's Board of Directors in July 1974. In May 1975, Borman was elected President and Chief Operating Officer. He was named Chief Executive Officer of Eastern Airlines in December 1975 and became Chairman of the Board in December 1976.

After Borman became Eastern Airlines's CEO, it went through the four most profitable years in the company's history. However, in 1983, contentious battles with labor unions, particularly the International Association of Machinists and Aerospace Workers (IAM) led the company to abandon several profitable programs and the resulting losses led to the sale of the airline to Texas Air Corporation, headed by Frank Lorenzo. Borman retired from Eastern Airlines in June 1986. An IAM strike and intransigence by the IAM Union forced Eastern into bankruptcy in 1989, followed by liquidation in 1991.

Borman with Jim Lovell and William Anders in December 2008

Borman returned to Tucson, Arizona, to reside, and as of 2006 has been living in Las Cruces, New Mexico, where he enjoys rebuilding and flying airplanes from the World War II and Korean War era. Today, he is a member of the Society of Antique Modelers (SAM). Borman gave the Commencement Address to the graduating class of 2008 at the University of Arizona.

For a time during his retirement, Borman was the majority holder of a Chevrolet dealership founded by his son Fred.

Borman has since appeared in the documentary When We Left Earth: The NASA Missions. On November 13, 2008, Borman and fellow Apollo 8 crewmembers Jim Lovell and Bill Anders appeared on the NASA TV channel to discuss the Apollo 8 mission.

Borman currently resides with his wife Susan in Bighorn, Montana. They had two sons, Edwin and Frederick.

"There's no question that it was a coffin, and I'd have flown it gladly." — Public comment on the hazardous design and construction of the Apollo Command Module, while serving on the AS-204 Accident Review Board.

"Had that rocket not fired, I'd still be orbiting the moon. Forever. And I really didn't want to do that." — Spoken of the Apollo 8 mission during the documentary When We Left Earth: The NASA Missions

"I've long said that capitalism without bankruptcy is like Christianity without Hell. But it's hard to see any good news in this." — as chairman of Eastern Airlines