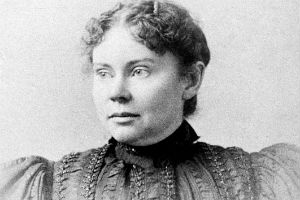 Lizzie Andrew Borden (July 19, 1860 – June 1, 1927) was an American woman who was tried and acquitted in the 1892 axe murders of her father and stepmother in Fall River, Massachusetts. The case was a cause célèbre throughout the United States. Following her release from the prison in which she had been held during the trial, Borden chose to remain a resident of Fall River, Massachusetts for the rest of her life, despite facing significant ostracism. The Commonwealth of Massachusetts elected to charge no one else with the murder of Andrew and Abby Borden, and speculation about the crimes continues into the 21st century.

Lizzie Borden's father Andrew Jackson Borden, despite being the descendent of wealthy and influential residents of the area, grew up in very modest surroundings and struggled financially as a young man. As he grew older he prospered through the manufacture and sales of furniture and caskets. He later became a successful property developer and directed several textile mills including the Globe Yarn Mill Company, Troy Cotton, and Woolen Manufacturing Company. By the time of the murders he owned considerable commercial property and was both president of the Union Savings Bank and a director of the Durfee Safe Deposit and Trust Co. Despite his wealth, Andrew was known for his frugality. The Borden home, for instance, lacked indoor plumbing on its ground and first floor, and was located near Andrew's businesses; the wealthiest residents of Fall River, Massachusetts generally lived in a more fashionable neighborhood ("The Hill") that was further away from the industrial areas of the city and much more homogenous racially, ethnically, and socioeconomically.

Lizzie and her older sister Emma had a relatively religious upbringing, attending Central Congregational Church. As a young woman Lizzie was very involved in activities related to her church, including teaching Sunday school to children of recent immigrants to America. She also was involved in Christian organizations such as the Christian Endeavor Society, where she served as its secretary-treasurer; and contemporary social movements such as the Women’s Christian Temperance Union. She was a member of the Ladies Fruit and Flower Mission.

During the inquest family live-in maid Bridget Sullivan testified that Lizzie and her sister rarely ate meals with their parents. Further during questioning by police and during the inquest Lizzie indicated that she did not call her stepmother "Mother" but rather "Mrs. Borden" and demurred on the subject of whether or not they were cordial with each other. In May 1892, there was an incident in which Andrew, believing that pigeons Lizzie kept in the barn were attracting intruders, killed the pigeons with a hatchet. A family argument in July 1892 prompted both sisters to take extended "vacations".

Tension had been growing in the family in the months before the murders, especially over Andrew's gifts to various branches of the family. After Abby's relatives received a house, the sisters demanded and received a rental property—which they later sold back to their father for cash—and just before the murders a brother of Andrew's first wife had visited regarding transfer of another property. The night before the murders John Vinnicum Morse, the brother of Lizzie's and Emma's deceased mother, visited the home to speak about business matters with Andrew. Some writers have speculated that their conversation—particularly as it related to property transfer—may have aggravated an already tense situation.

For several days before the murders the entire household had been violently ill. The family doctor blamed food left on the stove for use in meals over several days, but Abby had feared poisoning—Andrew Borden had not been a popular man.

On August 4, 1892, Andrew Borden breakfasted with his wife and made his usual rounds of the bank and post office, returning home about 10:45 am. The Bordens' maid, Bridget Sullivan, testified that she was in her third-floor room, resting from cleaning windows, when just before 11:10 am she heard Lizzie call out, "Maggie, come quick! Father's dead. Somebody came in and killed him." (Sullivan was sometimes called "Maggie", the name of an earlier maid).

Andrew was slumped on a couch in the downstairs sitting room, struck 10 or 11 times with a hatchet-like weapon. One of his eyeballs had been split cleanly in two, suggesting he had been asleep when attacked. Soon after, as neighbors and doctors tended Lizzie, Sullivan discovered Abby Borden in the upstairs guest bedroom, her skull crushed by 19 blows.

Police found a hatchet in the basement which, though free of blood, was missing most of its handle. Lizzie was arrested on August 11; a grand jury began hearing evidence on November 7 and indicted on December 2.

Prominent points in the trial (or press coverage of it) included:

The hatchet head found in the basement was not convincingly shown to be the murder weapon. Prosecutors argued that the killer had removed the handle because it was bloody, but while one officer testified that a hatchet handle was found near the hatchet head, another officer contradicted this.

Though no bloody clothing was found, a few days after the murder Lizzie burned a dress in the stove, saying it had been ruined when she brushed against fresh paint.

There was a similar axe murder nearby shortly before the trial, though its perpetrator was shown to have been out of the country when the Bordens were killed.

Evidence was excluded that Lizzie had sought to purchase prussic acid (for cleaning a sealskin cloak, she said) from a local druggist on the day before the murders.

Because of the mysterious illness that had struck the household before the murders, the family's milk and Andrew and Abby's stomachs (removed during autopsies performed in the Borden dining room), were tested for poison; no poison was found.

The victims' heads were removed during autopsy. After the skulls were used as evidence during the trial – Borden fainted upon seeing them – the heads were later buried at the foot of each grave.

On June 20, after deliberating an hour and a half, the jury acquitted.

The trial has been compared to the later trials of Bruno Hauptmann, Ethel and Julius Rosenberg, and O.J. Simpson as a landmark in publicity and public interest in the history of American legal proceedings.

No one else was charged in the murders, and they continue to be the subject of research and speculation. Among those suggested to be the killers by various authors are:

Lizzie herself, despite her acquittal—one writer proposing that she killed while in a fugue state.

Bridget Sullivan, perhaps in anger at being ordered to clean windows on a hot day—the day of the murders was unusually hot—and while still recovering from the mystery illness that had struck the household.

A "William Borden" (who according to this theory was Andrew Borden's illegitimate son) after failing to extort money from his father.

Emma Borden, having established an alibi at Fairhaven, Massacusetts (about 15 miles away from Fall River, Massachusetts) comes secretly to Fall River to commit the murders and returns to Fairhaven to receive the telegram informing her of the murders.

After the trial the sisters moved to a large, modern house in the fashionable "Hill" neighborhood of Fall River. Around this time Lizzie began using the name Lizbeth A. Borden. At their new house, which Lizbeth named "Maplecroft," the sisters had a staff that included live-in maids, a housekeeper and a coachman. Because Abby was ruled to have died before Andrew, her estate went first to Andrew and then, at his death, passed to his daughters as part of his estate; a considerable settlement, however, was paid to settle claims by Abby's family (especially Abby's two sisters).

Despite the acquittal, Lizbeth was ostracized by Fall River society. Lizbeth Borden's name was again brought into the public eye when she was accused of shoplifting in 1897 in Providence, Rhode Island.

In 1905, shortly after an argument over a party Lizbeth had given for actress Nance O'Neil, Emma moved out of the house.

Lizbeth was ill in her last year following the removal of her gallbladder; she died of pneumonia on June 1, 1927 in Fall River. Funeral details were not published and few attended. Nine days later, Emma died from chronic nephritis at the age of 76 in a nursing home in Newmarket, New Hampshire, having moved to this location in 1923 both for health reasons, and to get away from the public eye, which had renewed interest in the sisters at the publication of another book about the murders. The sisters, who never married, were buried side by side in the family plot in Oak Grove Cemetery.

Lizbeth left $30,000 to the Fall River Animal Rescue League and $500 in trust for perpetual care of her father's grave; her closest friend and a cousin each received $6,000—substantial sums at the estate's distribution in 1933, during the Great Depression. Books from Maplecroft's library, stamped and signed by the sisters, are valuable collectors' items.

The case was memorialized in a popular skipping-rope rhyme:

And gave her mother forty whacks.

When she saw what she had done

She gave her father forty-one.

Folklore says the rhyme was made up by an anonymous writer as a tune to sell newspapers. Others attribute it to the ubiquitous, but anonymous "Mother Goose". In reality, Lizzie's stepmother suffered 18 or 19 blows; her father, 11 blows.