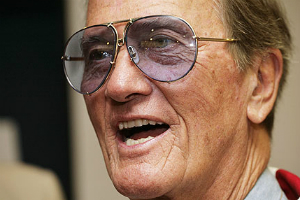 Growing up in Nashville, Pat played varsity basketball. He worked for his dad's construction company as a kid for 75 cents an hour. He began singing at a local Kiwanis Club at 14 and it became his favorite occupation. He was interested in pop music until he was 16, when a beautiful country singer enlarged his cultural horizons. She turned out to be Shirley Foley, the daughter of Red Foley (country star), and three years later became Mrs. Boone when the young couple eloped.

While still in college, Pat became the preacher to a little country church in Slidell, TX, where he and Shirley lived on $44.50 a week. When he was 21, he entered the Arthur Godfrey talent show, and won. Godfrey offered him a steady job on his show in New York. During the mid-'50s, he recorded "Love Letters in the Sand," and "Ain't That a Shame." Fame and fortune followed.

For his "cause," Boone has hosted the annual Easter Seal Telethon for more than a decade. He even wrote a book relating the story of the Easter Seals, "The Human Touch," whose proceeds go to the charity. Being the father of four daughters prepared him for writing his book, "Twixt Twelve and Twenty," 1959. Actually, he has some 15 or more books to his credit, several of them best sellers. He is active as an elder in the Church on the Way in Van Nuys, CA, and he takes a strong pro-life stand on abortion.

Boone retained a clean-cut-American-boy image well into his 40s, which he bent a bit in 1996 when he released an album of heavy-metal, "In a Metal Mood: No More Mr. Nice Guy." He startled his fans with his tongue-in-cheek promo presentation, in which he exhibited a bare chest, black leather, a spiked dog collar and chains. The Trinity Broadcasting Network was not amused; they cancelled his gospel radio show.