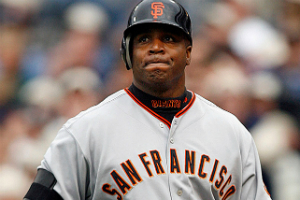 American athlete, record-setting professional baseball player for the San Francisco Giants, son of another remarkable baseball player, Bobby Bonds. Most notably, through 2005, Barry Bonds has hit 708 home runs, nearly tying Babe Ruth's record (714). Bonds’ stellar record is not admired by everyone. He has been embroiled in a debate over whether the illegal use of steroids enhanced his show-stopping performance at bat. Nevertheless, he has been named Most Valuable Player seven times, won eight Golden Glove awards and led his team to the 2002 World Series, where the Giants were defeated in the seventh game. In 2001 he set the record for number of home runs in a season (73). He has played in 12 All-Star games. According to one writer, the combination of power and speed that he displays has only been seen in the performance of his godfather Willie Mays.

The oldest of four kids, Bonds was drafted into pro baseball in 1982 but opted to complete college first. He began his major league career with the Pittsburgh Pirates in 1986. A 6'2" left-handed slugger, he opted to sign with the San Francisco Giants in 1993. Since then he has established new records, in 2001 breaking two of Babe Ruth's records, one for most walks and the other for the highest slugging percentage in one season. The following year, he broke Ted Williams' single-season record for percentage of time on- base and at the same time established a new record for number of walks in a season. He broke his own record in 2004 with 232 walks for the season.

Health and other problems have beset the slugger. In 1999 he was treated for knee injuries and other problems. In late July 2003, his beloved father underwent heart surgery and died the following month. Bonds was himself hospitalized that year with exhaustion and atrial fibrillation. In 2004, the San Francisco Chronicle published leaked testimony from a grand jury that alleged Bonds admitted to using illegal substances unknowingly. His trainer had reportedly given him creams which Bonds claimed he did not know contained steroids.

On January 31, 2005 he underwent surgery on his right knee. Two months later, he had another procedure on the same knee. On May 2 that year, a bacterial infection was flushed from the injured site. After undergoing orthopedic rehabilitation, he was able to play in only 14 games for the 2005 season. In early 2006 he hurt his elbow.

In late March 2006 the book “Game of Shadows" was published. The authors claim that Bonds took steroids for at least five seasons in San Francisco. Rather than suing for libel, Bonds and his lawyers instead sought to block the authors from profiting, claiming that they “illegally obtained” grand jury testimony. Bonds and his legal team were denied a temporary restraining order on the book’s profits. His documentary, "Bonds on Bonds," aired on cable TV on April 4, 2006.

Bonds has been married twice, first to Susann from February 1988 to December 1994 when the couple divorced. They had a son Nikolai Lamar in December 1989 and a daughter Shikari in March 1991. Bonds married Liz Watson on January 10, 1998 and they have a daughter Aisha.

On May 20, 2006 in Oakland, CA, Bonds hit homer # 714, tying Babe Ruth’s record. A few days later, on the 28th, he exceeded the record, hitting his 715th home run in San Francisco. Amidst continuing controversy over whether or not he has taken illegal performance-enhancing drugs, Bonds broke the record for career homers by hitting his 756th in San Francisco at about 8:50 PM PDT on August 7, 2007 (time from news reports).

On November 15, 2007 in San Francisco, Barry Bonds was indicted by a Grand Jury on perjury and obstruction of justice.

At the end of his April 2011 trial, a jury deadlocked on perjury charges but charged him with obstruction of justice for intentionally being evasive in his grand jury testimony. On December 16, 2011 he was sentenced to two years' probation with home confinement, plus a $4,000 fine.