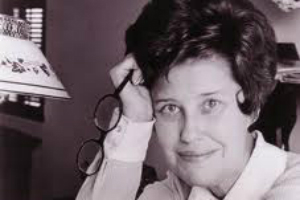 American journalist and humorist, the author of 11 books and a column read by millions in 700 cities. Her books include "The Grass is Always Greener Over The Septic Tank," "If Life is a Bowl of Cherries, What am I Doing in the Pits?" and "A Marriage Made in Heaven... Or Too Tired For An Affair."

A newspaper reporter before she quit work to care for a husband and three kids, she began writing a humor column in 1964 and was syndicated the following year. With a mischievous smile and an exuberance of spirit, Bombeck knew that she wanted to be a humor writer from the age of 14.

Her mom was 16 when Erma was born and they were lifelong best friends. A bright student, Erma was also a good dancer and blues singer. Devastated by her dad's death when she was nine, she withdrew for a while and lost weight. Two years later she had a new step dad, a feed-store clerk named Tom Harris. She resented him at first, but they became close pals.

Erma started a school paper and worked after school as a copy clerk at the local paper. It was there she met and fell in love with a fellow copy clerk, Bill Bombeck from the minute they met. Bill was drafted and left for Korea, but they exchanged letters. He mustered out in 1947 and entered the University. They married in 1949 and he taught high school history while she polished her writing skills on obits and features at the paper. In 1953 she quit to stay home with Betsy, whom they adopted when she failed to get pregnant. She gave birth to Andrew in 1955 and Matthew three years later. She and Bill, who became a high school administrator, were married for 46 years.

Her sense of humor, irrepressible, spilled out in her daily life with tossing off wry domestic quips, such as "Housework, if you do it right, will kill you," and "Why clean the oven? If you can still get a cupcake in there without touching the sides, you're in good shape."

When her youngest was in school, Erma began writing a column, "At Wit's End," about home life in suburbia, for the Dayton Journal Herald. With a year she was syndicated across the country. Her popularity skyrocketed with her books and the family moved to Paradise Valley, CA in 1971, a rural, mountainous community.

Her celebrity increased with the years. She did humor segments on "Good Morning America" from 1975 to 1986 and 11 of her books became bestsellers. She kept her fame in perspective as only one who can laugh about herself is able. She contributed to numerous charities including the American Cancer Society. She kept the same friends for years and never put on airs.

In 1992, Bombeck had a double mastectomy for breast cancer. The following year in July, she suffered total kidney failure, which required her to undergo dialysis four times a day while waiting for a transplant. In addition, she hooked herself up to an I.V. bag for a ten-minute peritoneal dialysis treatment every day.

The life-saving kidney transplant came through on 4/03/1996. She died in less than a month after the operation, on 4/22/1996, 3:27 AM, San Francisco. A selection of her columns, which were being syndicated in 600 newspapers by the time she died, was published in a book called "Forever, Erma," which became a bestseller.