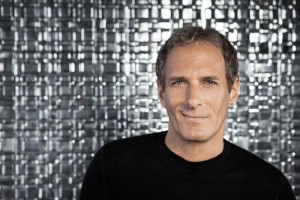 Michael Bolton (born February 26, 1953) is an American singer-songwriter and a former hard rock singer. He is best known for his soft rock ballads and tenor vocals.

His achievements include selling many albums, eight top ten albums, two number one singles on the Billboard charts, and awards from both the American Music Awards and Grammy Awards.

Mainstream success
Bolton's hard rock band, Blackjack, once toured with heavy metal singer Ozzy Osbourne. He began recording as Michael Bolotin in 1975, after gaining his first major hit as a songwriter, co-writing "How Am I Supposed to Live Without You" for Laura Branigan, previously best-known for singing the disco-pop classic "Gloria". Narrowly missing the Top 10 on the U.S. pop chart, Branigan took the song to number one on the Adult Contemporary chart for three weeks. The two sought to work with each other again, and their next collaboration was when Bolton co-wrote "I Found Someone" for Branigan in 1985. Her version was only a minor hit, but two years later, Cher resurrected the song, and with it her own singing career. Bolton co-wrote several other songs for both singers.

Bolton would achieve his greatest success in the late eighties and early nineties as a singer in the adult contemporary/easy listening genre. One of his first major hits was his 1987 interpretation of the Otis Redding classic, "(Sittin' On) the Dock of the Bay." Always interested in soul and Motown classics, Bolton's success with that song encouraged him to tackle the standard "Georgia On My Mind," with which he had another hit. In 1991, Bolton released the album "Time, Love & Tenderness", which featured his Grammy award winning cover of "When a Man Loves a Woman".

Bolton's last Top 40 single in the US was the 1997 hit "Go the Distance" (featured in the Walt Disney motion picture Hercules), which peaked at #1 on the U.S. adult contemporary chart.

In March 2007, Bolton toured South Africa for the first time. He was the headline act at Jacaranda 94.2 FM's two day concert.

Bolton recorded the song "New York, New York" (also on his Bolton Swings Sinatra album), for an album which was recorded in five days, Over the Rainbow. This was for an episode of the TV series, Challenge Anneka. The proceeds from the album went to children's hospices across the UK.

Bolton performed a duet entitled "Il Mio Amico" with the Italian singer Anna Tatangelo at the Sanremo Music Festival 2008. The song was originally sung by Tatangelo alone, but the duet version contained English lyrics as well. It is a song about the difficulties of being a homosexual in Italy, written by Tatangelo's partner, Gigi D'Alessio.

Bolton appeared as an extra in the theatrical release of Frank Herbert's Dune featuring Sting and Kyle MacLachlan. In their final fight scene, he plays a "spice-eyed" drummer.

In a scene from the 1999 film Office Space, a character named Michael Bolton (a computer programmer) makes disparaging remarks about the singer, calling him a "no-talent ass clown." When asked about this scene in an interview, the real-life Bolton replied that he has never seen the film but has autographed many copies of the DVD.

He made a cameo appearance in the 2002 film Snow Dogs as himself during a dream sequence.

In December 2007, Bolton took part in NBC's Clash of the Choirs. He led "Team Bolton." However, they were eliminated in the second round.

Mentioned from time to time by Sarah Nade when caught by a gumshoe on the game show version of Where in the World is Carmen Sandiego?

In the 2000 comedy Ready To Rumble, one of the characters is explaining to his son how just because you have a dream it doesn't make it right or noble. He then goes to use examples, such as Charlie Manson, Joe Stalin, and then Michael Bolton.
Legal troubles

On May 9, 2000, a U.S. Court of Appeals affirmed a jury's 1994 decision that Bolton's 1991 pop hit, "Love Is a Wonderful Thing", infringed on the copyright of the 1964 Isley Brothers song of the same name, and let stand the jury's award of $5.4 million against the singer, his co-author, Andrew Goldmark, and their record company, Sony Music Entertainment. See Three Boys Music Corp. v. Bolton, 212 F.3d 477 (9th Cir. 2000). This was the biggest payout in musical copyright infringement to date.
Personal life

Michael Bolton was born into a Russian family in New Haven, Connecticut.

Bolton is the father of three children.

Bolton became engaged to actress Nicollette Sheridan in March 2006, however it was confirmed on August 26 2008 that they had broken off their engagement.
Charity work

In 1993, he established the Michael Bolton Foundation (now the Michael Bolton Charities) to assist women and children at risk from the effects of poverty, emotional, physical, and sexual abuse. The foundation has provided over $3.7 million in funding to local and national charities.

Bolton also serves as the honorary chairman of Prevent Child Abuse America, the national chairman for This Close for Cancer Research, and a board member for the National Mentoring Partnership and the Joe DiMaggio Children's Hospital.

In March 2003, Bolton joined with Lifetime Television, Verizon Wireless, and many others to lobby on behalf of the National Coalition Against Domestic Violence, urging legislation to provide more assistance for victims of domestic violence, such as affordable housing options.

Bolton has received the Lewis Hine Award from the National Child Labor Committee, the Martin Luther King Award from the Congress of Racial Equality, and the Ellis Island Medal of Honor from the National Ethnic Coalition of Organizations. The Hollywood Chamber of Commerce also recognized Bolton with a star on the "Hollywood Walk of Fame" for his musical and charitable contributions.