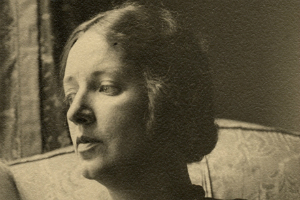 As poetry editor of The New Yorker magazine for nearly 40 years, Bogan played a major role in shaping mainstream poetic sensibilities of the mid-20th Century.

The Poetry Foundation notes that Bogan has been called by some critics the most accomplished woman poet of the twentieth century. It further notes that, "Some critics have placed her in a category of brilliant minor poets described as the "reactionary generation." This group eschewed the prevailing Modernist forms that would come to dominate the literary landscape of the era in favor of more traditional techniques.

Dictionary of Literary Biography contributor Brett C. Millier named Bogan "one of the finest lyric poets America has produced," and added that "the fact that she was a woman and that she defended formal, lyric poetry in an age of expansive experimentation made evaluation of her work, until quite recently, somewhat condescending."

Bogan was born in Livermore Falls, Maine, where her father, Daniel Bogan, worked for various paper mills and bottling factories. She spent most of her childhood years with her parents and brother growing up in mill towns in Maine, New Hampshire, and Massachusetts, where she and her family lived in working-class hotels and boardinghouses until 1904.

With the help of a female benefactor, Bogan was able to attend the Girls’ Latin School for five years, which eventually gave her the opportunity to attend Boston University. In 1916, after only completing her freshman year and giving up a fellowship to Radcliffe, she left the university to marry Curt Alexander, a corporal in the U.S. Army, but their marriage ended in 1918. Bogan moved to New York to pursue a career in writing, and their only daughter, Maidie Alexander, was left under the care of Bogan’s parents. After her first husband's death in 1920, she left and spent a few years in Vienna, where she explored her loneliness and her new identity in verse. She returned to New York City and published her first book of poetry, Body of This Death: Poems, in 1923, meeting that year the poet and novelist Raymond Holden. They were married by 1925. Four years later, she published her second book of poetry, Dark Summer: Poems, and shortly after was hired as a poetry editor for The New Yorker. However, the past was repeated and the constant struggle between Holden’s self-indulgence and Bogan’s jealousy resulted in their divorce in 1937.

Bogan's poetic style was unlike that of Ezra Pound or T. S. Eliot. Suzanne Clark, an English professor from the University of Oregon, stated that Bogan often refers to her female speakers as "the locus of intemperate, dangerous, antisocial desires." This coincides with the notion that Bogan brought a different perspective to the traditional viewpoint of women.

Not only was it difficult being a female poet in the 30s and 40s, but her lower-middle-class Irish background and limited education also brought on much ambivalence and contradiction for Louise Bogan. She even refused to review women poets in her early career and stated, "I have found from bitter experience that one woman poet is at a disadvantage in reviewing another, if the review be not laudatory." Bogan did not discuss intimate details of her life (and disdained such confessional poets as Robert Lowell and John Berryman).

Most of her work was published before 1938. This includes Body of This Death (1923), Dark Summer (1929), and The Sleeping Fury (1937). She also translated works by Ernst Jünger, Goethe, and Jules Renard. Later in Bogan's life, a volume of her collected works, The Blue Estuaries: Poems 1923-1968, was published with such poems as "The Dream" and "Women."

In late 1969, shortly before her death, she ended her thirty-eight year career as a reviewer for The New Yorker, stating, "No more pronouncements on lousy verse. No more hidden competition. No more struggling not to be a square."

One of her admirers was W. H. Auden.

Her poetry was published in The New Republic, The Nation, Poetry: A Magazine of Verse, Scribner's, and Atlantic Monthly. Her "Collected Poems: 1923-1953" won her the Bollingen award in 1955 as well as an award from the Academy of American Poets in 1959, and she was the poetry reviewer of The New Yorker from 1931 until 1969, when she retired. She was a strong supporter, as well as a friend, of the poet Theodore Roethke.

In a letter to Edmund Wilson, she detailed a raucous affair that she and the yet-unpublished Roethke carried on in 1935, during the time between his expulsion from Lafayette College and his return to Michigan. At the time she seemed little impressed by what she called his "very, very small lyrics"; she seems to have viewed the affair as, at most, a possible source for her own work (see What the Woman Lived: Collected letters of Louise Bogan).

On February 4, 1970, Louise Bogan died of a heart attack in New York City. The Archives and Special Collections at Amherst College holds some of her papers.

A number of autobiographical pieces were published posthumously in Journey around My Room (1980). Elizabeth Frank's biography of Louise Bogan, Louise Bogan: A Portrait, won a Pulitzer Prize in 1986. Ruth Anderson's sound poem I Come Out of Your Sleep (revised and recorded on Sinopah 1997 XI) is constructed from speech sounds in Bogan's poem "Little Lobelia."

"I cannot believe that the inscrutable universe turns on an axis of sufferin; surely the strange beauty of the world must somewhere rest on pure joy!" – Louise Bogan

Bogan married twice. In 1916 she married a soldier, Curt Alexander, and had one daughter, but the couple separated before Alexander's death in 1920. She was married to poet Raymond Holden from 1925 to 1937.

Despite the hardships Bogan encountered during the twenties and thirties, she was able to experience the fascinations of the Renaissance painting, sculpture and ornament. However, this was soon interrupted by the onset of a mental illness that landed her in a psychiatric hospital in 1931 and again in 1933, where she was diagnosed with depression marked by obsessive and paranoid inclinations.