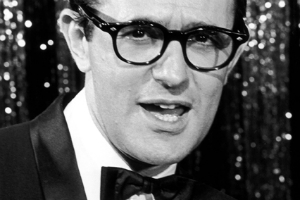 Larry Blyden (June 23, 1925 – June 6, 1975) was an American actor and game show host, best known for his appearances on Broadway and as the host of the game show What's My Line?

Born Ivan Lawrence Blieden in Houston, Texas, Blyden, a practicing Jew, was married to actress and dancer Carol Haney (1925–1964) between 1955 and 1962. The couple had two children: Joshua, born in 1957, and Ellen, born in 1960. Their relationship was tempestuous, and they divorced two years before her death.

Blyden and Haney resided in the historic Achenbach House in Saddle River, New Jersey, which they believed to be haunted by the spirit of its builder. The house was later sold to tour operator Mario Perillo and was destroyed by fire in 2004.

Blyden's career had three distinct phases. For most of his career, he was known as both a good, solid character actor on television and a highly in-demand Broadway actor. Other television work he did included his starring in one situation comedy, Harry's Girls, which ran on NBC for fifteen episodes from 1963 to 1964. In this adaptation of the Robert E. Sherwood play Idiot's Delight, Blyden starred as Harry, a vaudeville style performer constantly getting into trouble and falling in love. Blyden also did many guest performances on such dramatic anthology shows as Playhouse 90, Omnibus, and The Loretta Young Show along with The Twilight Zone and other non-anthology dramatic programs. Although he was generally cast as a nice guy, his two Twilight Zone episodes display an impressive range as he acted out two very different characters, both with dysfunctional personalities: the tough-talking hood who dies and finds the afterlife a little too pleasant in the classic episode "A Nice Place to Visit," and the titular vain, cowardly cowboy star in the comedic episode "Showdown with Rance McGrew." And in a 1965 episode of The Alfred Hitchcock Hour called "Wally the Beard," he portrayed a meek, balding man whose life undergoes many changes, including a murder, once he begins wearing a toupee and beard while changing his appearance and identity.

Blyden was an in-demand Broadway and off-Broadway actor. His first Broadway role was in Wish You Wish Here. In 1958, he was in the original cast of Flower Drum Song as the slick Sammy Fong, for which he was nominated for a Tony Award for Best Actor in a Musical. The show was choreographed by his wife, and Blyden replaced Larry Storch in the role during out-of-town tryouts. He starred in shows such as Mister Roberts, where he replaced David Wayne in the role of Ensign Frank Pulver, which Jack Lemmon later acted out in the film version, Harold, Foxy, The Apple Tree (as the devil), You Know I Can't Hear You When the Water's Running, and a revival of A Funny Thing Happened on the Way to the Forum (with Phil Silvers), which he helped produce and for which he won the Tony Award for Best Featured Actor in a Musical for the role of the slave Hysterium.

Late in his career, he became a game-show presenter and "emcee," or master of ceremonies, starting with Personality in 1967. He also hosted You're Putting Me On, The Movie Game, and finally and most successfully, What's My Line?. Blyden also had a brief, and rather uneventful, film career. He played secondary parts in the films Kiss Them for Me and The Bachelor Party, both of which were released in 1957, and the film version of On a Clear Day You Can See Forever, released in 1970.

In 1974, Blyden appeared in a play in New Haven, Connecticut with the Yale Repertory Theatre. A musical comedy named The Frogs, by Burt Shevelove, and freely based on a play written by Aristophanes in 405 B.C., its music had been composed, and its lyrics written, by Stephen Sondheim. Blyden played Dionysos. Notable in the chorus of this production of The Frogs were a young Meryl Streep and Sigourney Weaver, both of whom were students at the Yale School of Drama.

In the weeks before his death, Blyden was involved in several major projects. He co-hosted the Tony Awards telecast on April 20, 1975. That May 2, Blyden reprised his role as Ensign Pulver opposite Henry Fonda and Lee Goodman at a gala tribute to director Joshua Logan at Broadway's Imperial Theatre (which was recorded and eventually released on a privately distributed LP album). Having been hired as host of the Mark Goodson-Bill Todman game show Showoffs, Blyden left the cast of the Broadway production of the Alan Ayckbourn comedy Absurd Person Singular and videotaped a pilot for the game show on May 24. Several days later, he took a vacation to Morocco. While driving to Tan-Tan to shop for native jewelry, his rental car reportedly went off the road and overturned, knocking him unconscious. Doctors in an Agadir hospital were unable to contact Blyden's family for several days, as Blyden had been carrying no identification. Blyden died on June 6, 1975, less than three weeks before he would have turned 50. Bobby Van eventually took over the hosting duties for Showoffs.

Another theory regarding Blyden's death has been suggested. On the commentary track of the 2009 DVD release of Blyden's TV production of "What Makes Sammy Run" (1959), his co-star Barbara Rush says that Blyden was actually carjacked in Morocco and killed on the spot for his vehicle. Likewise, Blyden's The Apple Tree co-star Robert Klein wrote in his 2005 memoir The Amorous Busboy of Decatur Avenue that "Blyden died on vacation in North Africa under mysterious circumstances (...) He was alone and possibly waylaid and murdered by nomads."