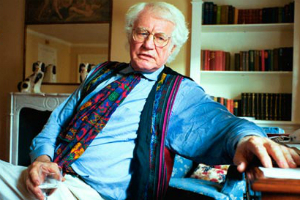 American poet, translator, editor and publisher; active in the men’s movement since the 1980s, doing workshops and writing about men’s issues in "Iron John" and other works. A storyteller and minstrel, he integrates Jungian and mystical insights into his work.

Bly was born to parents of Norwegian descent. After serving in the U.S. Navy from 1944 to 1946, he received his bachelor of arts degree from Harvard University in 1950, and his master of arts degree from the University of Iowa in 1956. In 1958 he co-founded the magazine "The Fifties" (its name changed with the decades), which published important young poets. Bly's first collection of poems, "Silence in the Snowy Fields" in 1962, was followed by "The Light Around the Body," which won a 1968 National Book Award. He published more poems and "prose poems" in volumes throughout the next decades. In 1966 he co-founded American Writers Against the Vietnam War and led much of the opposition to the war by writers.

In the 1980s his poems and work centered on men’s issues as explored in his best-selling "Iron John: A Book About Men" in 1990. He makes his living writing, editing, giving poetry readings around the nation and translating Scandinavian fiction. His second large prose book, "The Sibling Society," is the subject of nationwide discussion.

A tall and pleasant looking man, he frequently does workshops for men with James Hillman and others, and workshops for men and women with Marion Woodman. He and his wife Ruth, along with storyteller Gioia Timpanelli, frequently conduct seminars on European fairy tales. Bly has avoided academia and the consumerist culture, preferring to live in the small town of Moose Lake, Minnesota on a farm with his wife and three children.