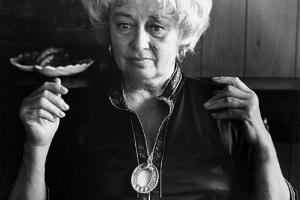 Rose Joan Blondell (August 30, 1906 – December 25, 1979) was an American actress who performed in movies and on television for five decades as Joan Blondell.

After winning a beauty pageant, Blondell embarked upon a film career. Establishing herself as a sexy wisecracking blonde, she was a pre-Code staple of Warner Brothers and appeared in more than 100 movies and television productions. She was most active in films during the 1930s, and during this time she co-starred with Glenda Farrell in nine films, in which the duo portrayed gold-diggers. Blondell continued acting for the rest of her life, often in small character roles or supporting television roles. She was nominated for an Academy Award for Best Supporting Actress for her work in The Blue Veil (1951).

Blondell was seen in featured roles in two films released shortly before her death from leukemia, Grease (1978) and the remake of The Champ (1979).

Blondell was born to a vaudeville family in New York City. Her father, known as Eddie Joan Blondell, Jr., was born in Indiana in 1866 to French parents, and was a vaudeville comedian and one of the original Katzenjammer Kids. Blondell's mother was Kathryn ("Katie") Cain, born April 13, 1884, in Brooklyn, of Irish American parents. Her younger sister, Gloria Blondell, also an actress, was briefly married to film producer Albert R. "Cubby" Broccoli (the future producer of the James Bond film series) and bears an extremely strong resemblance to her older sister, Joan. Blondell also had a brother, the namesake of her father and grandfather. Her cradle was a property trunk as her parents moved from place to place and she made her first appearance on stage at the age of four months when she was carried on in a cradle as the daughter of Peggy Astaire in The Greatest Love.

Joan had spent a year in Honolulu (1914-15) and six years in Australia and seen much of the world by the time her family, who had been on tour, settled in Dallas, Texas when she was a teenager. Under the name Rosebud Blondell, she won the 1926 Miss Dallas pageant and placed fourth for Miss America in Atlantic City, New Jersey, in September of that same year. She attended what is now the University of North Texas, then a teacher's college, in Denton, where her mother was a local stage actress, and she worked as a fashion model, a circus hand, and a clerk in a New York store. Around 1927, she returned to New York, joined a stock company to become an actress, and performed on Broadway. In 1930, she starred with James Cagney in Penny Arcade.

Penny Arcade only lasted three weeks, but Al Jolson saw it and bought the rights to the play for $20,000. He then sold the rights to Warner Brothers with the proviso that Blondell and Cagney be cast in the film version. Placed under contract by Warners, she moved to Hollywood where studio boss Jack Warner wanted her to change her name to "Inez Holmes", but Blondell refused. She began to appear in short subjects, and was named as one of the WAMPAS Baby Stars in 1931.

Blondell was paired with James Cagney in such films as Sinners' Holiday (1930) – the film version of Penny Arcade – and The Public Enemy (1931), and was one half of a gold-digging duo with Glenda Farrell in nine films. During the Great Depression, Blondell was one of the highest paid individuals in the United States. Her stirring rendition of "Remember My Forgotten Man" in the Busby Berkeley production of Gold Diggers of 1933, in which she co-starred with Dick Powell and Ruby Keeler, became an anthem for the frustrations of the unemployed and the government's failed economic policies. (Even though she was cast in many of the classic Warners musicals, she was not a singer, and in the Forgotten Man number, she mostly talked and acted her way through the song.) In 1937, she starred opposite Errol Flynn in The Perfect Specimen.

By the end of the decade, she had made nearly fifty films, despite having left Warner Bros. in 1939. Continuing to work regularly for the rest of her life, Blondell was well received in her later films, despite being relegated to character and supporting roles after the mid-1940s. She was billed below the title for the first time in fourteen years in 1945 in the film Adventure, which starred Clark Gable and Greer Garson). She received an Academy Award for Best Supporting Actress nomination for her role in The Blue Veil (1951). She was also featured prominently in A Tree Grows in Brooklyn (1945); Nightmare Alley (1947); The Opposite Sex (1956), which paired her with ex-husband Dick Powell's wife, June Allyson; Desk Set (1957); and Will Success Spoil Rock Hunter? (1957). She received considerable acclaim for her performance as Lady Fingers in Norman Jewison's The Cincinnati Kid (1965), garnering a Golden Globe nomination and National Board of Review win for Best Supporting Actress. John Cassavetes cast her as a cynical, aging playwright in his film Opening Night (1977). Blondell was widely seen in two films released not long before her death, Grease (1978) and the remake of The Champ (1979) with Jon Voight and Rick Schroder.

Blondell also guest starred in various television programs, including three episodes in 1963 as the character "Aunt Win" of the CBS sitcom The Real McCoys, starring Walter Brennan and Richard Crenna. She appeared in a 1964 episode "What's in the Box?" of The Twilight Zone. She guest starred in the episode "You're All Right, Ivy" of Jack Palance's circus drama, The Greatest Show on Earth, which aired on ABC in the 1963—1964 television season. Her co-stars in the segment were Joe E. Brown and Buster Keaton. In 1965, she was in the running to replace Vivian Vance as Lucille Ball's sidekick on the hit CBS television comedy series The Lucy Show. Unfortunately, after filming her second guest appearance as 'Joan Brenner' (Lucy's new friend from California), Blondell walked off the set right after the episode had completed filming when Ball humiliated her by harshly criticizing her performance in front of the studio audience and technicians.

Blondell continued working on television. In 1968, she guest-starred on the CBS sitcom Family Affair, starring Brian Keith. She also replaced Bea Benaderet, who was ill, for one episode on the CBS series Petticoat Junction. In that installment, Blondell played FloraBelle Campbell, a lady visitor to Hooterville, who had once dated Uncle Joe (Edgar Buchanan) and Sam Drucker (Frank Cady). That same year, Blondell co-starred in the ABC western series Here Come the Brides, set in the Pacific Northwest of the 19th century. Her co-stars included singer Bobby Sherman and actor-singer David Soul. Blondell received two consecutive Emmy nominations for outstanding continued performance by an actress in a dramatic series for her role as Lottie Hatfield.

In 1972, she had an ongoing supporting role in the NBC series Banyon as Peggy Revere, who operated a secretarial school in the same building as Banyon's detective agency. This was a 1930s period action drama starring Robert Forster in the titular role. Her students worked in Banyon's office, providing fresh faces for the show weekly. The series was replaced mid-season.

Blondell has a star on the Hollywood Walk of Fame for her contribution to Motion Pictures, at 6309 Hollywood Boulevard. In December 2007, the Museum of Modern Art in New York City mounted a retrospective of Blondell's films in connection with a new biography by film professor Matthew Kennedy and theatrical revival houses such as Film Forum in Manhattan have also projected many of her films recently.

Blondell was married three times, first to cinematographer George Barnes in a private wedding ceremony on 4 January 1933 at the First Presbyterian Church in Phoenix, Arizona. They had one child — Norman S. Powell, who became an accomplished producer, director, and television executive — and divorced in 1936. On 19 September 1936, she married her second husband, actor, director, and singer Dick Powell. They had a daughter, Ellen Powell, who became a studio hair stylist, and Powell adopted her son by her previous marriage. Blondell and Powell were divorced on 14 July 1944.

On July 5, 1947, Blondell married her third husband, producer Mike Todd, whom she divorced in 1950. Her marriage to Todd was an emotional and financial disaster. She once accused him of holding her outside a hotel window by her ankles. He was also a heavy spender who lost hundreds of thousands of dollars gambling (high-stakes bridge was one of his weaknesses) and went through a controversial bankruptcy during their marriage. An often-repeated myth is that Mike Todd "dumped" Joan Blondell for Elizabeth Taylor—when, in fact, Blondell left Todd of her own accord years before he met Taylor.

Blondell died of leukemia in Santa Monica, California, on Christmas Day 1979 at the age of 73 with her children and her sister at her bedside. She is interred in the Forest Lawn Memorial Park Cemetery in Glendale, California.