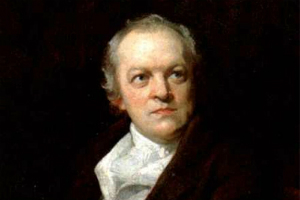 British artist, writer, engraver, painter and poet; a master in each field. His works are marked by genius, mysticism and compassion. His "Prophetic" books are so complex and obscure, that few profess to understand them.

He left Soho, the district of his birth, only once, and most of his life was spent in the same small area. He was entranced by London, aware of its symbolic existence through time, and described the city as "a Human awful wonder of God."

From childhood, he was influenced by the dissenting tradition into which he was born. His father, James, was a hosier, and both his parents were stout adherents of a dissenting sect, the precise nature of which is not known. The times boiled with religious and political energies, and Blake, in his early years, was exposed to such visionaries as Emanuel Swedenborg and Jacob Boehme.

Blake had seven siblings. His formal education was limited, which may have been partly by choice. He wrote, "I must Create a System, or be enslaved by another Man's."

At age 15, Blake was apprenticed to an engraver and over the years of his training he became more than a craftsman, but a universal artist. Plying his craft, he was a lower-middle-class tradesman, a mystic intimately involved in the world of commerce and craft. He lived with the smell of nut oil, varnish and lamp black as well as that of ink, surrounded by iron pots for the boiling of the oil, pans for warming the copper plates, tallow candles, racks of needles and gravers, line linen cloths to strain in the plates, rags for wiping the ink off the plates, pumice stones to polish the plates, feathers for smoothing the ground of varnish on the plates. It was a dirty work place, filled with its own smells and one that always gave him stability and comfort.

After his seven years apprenticeship, Blake went into his own small business, hiring a shop to sell his own prints and offering himself as an illustrator of books. He had little success, and in worldly terms his life must to considered a failure. He felt this keenly and in later years grew embittered and resentful of the success of lesser artists of his acquaintance. His wife, Catherine, sustained him in that her belief never faltered in his genius and his vision. When he might explain to a visitor the nature of his second sight, she would look at her husband with reverential awe, then look to their guest to ascertain that he comprehended the remarkable thing that he had just heard. Catherine was without reservation in her devotion to Blake.

His art, his poetry and paintings, and his books which he engraved and published himself, were a melding of word and image that must be considered all together to understand Blake. His visionary system is intricate, outlandish, hermetic and at times, preposterous. He held fast to certain precepts, such as "everything that lives is holy," and that sexual energy is one of the prime moving forces of the world and that it's repression leads to conflict and spiritual death. In his "Marriage of Heaven and Hell," he wrote, ".... men forgot that All deities reside in the human breast."

Blake died on 8/12/1827, 6:00 PM, at his home in London. His friend George Richmond wrote that he died "in a most glorious manner." He hoped for salvation through Jesus Christ and just before he died, "His Countenance became fair, His eyes Brightened and He Burst out into Singing of the things he saw in Heaven."

His work never faded from the public view, however it took time before the true nature of his genius was recognized. Like all true artists, he never lost faith in himself.