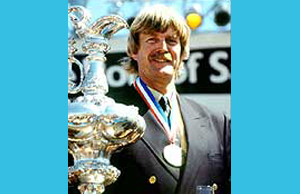 New Zealand explorer, scientist and yachtsman, a hero and role model, the winner of the Whitbreak Round the World Race in 1989 and the Jules Verne Trophy in 1994 by sailing nonstop around the globe on a catamaran in 74 days, 22 hours, 17 minutes and 22 seconds. In 2000, he became the first non-American entry to retain the America's Cup in 149 years after beating Italian challengers Prada 5-0. He was a two-time winner of the America's Cup, the first time in 1995.

Blake was shot to death by river pirate in the Amazon on 12/05/2001 when he resisted their boarding of his yacht. He was on a world-wide expedition to monitor global warming and pollution aboard his 119-ft yacht, the Seamaster, moored at the mouth of the Amazon near Macapa, 1,600 miles north of Sao Paulo. Several masked men approached in a rubber dinghy of the type commonly used by river rats in search of victims. They came over the rail and held the crew at gunpoint and when Sir Peter came charging up, they shot him in the chest at least twice. Two members of his crew of ten were slightly injured in the ensuing melee before the pirates fled.

Blake headed the Cousteau Society from 1973 and was knighted in 1995. In July 2001, he was appointed goodwill ambassador of the U.N. Environmental program. He and his crew had come from a three-month study of wildlife in the Antarctic region before arriving in Brazil in October. They spent two months in the upper reaches of the Amazon and Rio Negro where they encountered friendly, warm and hospitable people before their present mooring.

He is survived by his wife Pippa and two kids. He had been sailing from the time he was five years old and his mom said, "He loved boats, he loved racing and the water."

Seven suspects were arrested in the following days.