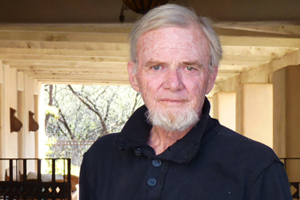 American writer, the author of the book and screenplay for "Dances with Wolves," the winner of the Golden Globe Award on 1/19/1991 and the entry that swept the Academy Awards in early 1991.

The oldest of four sons of a telephone company executive and a housewife, Blake was always fascinated by horses and Indian lore. He read of and researched frontier history for ten years and the idea for "Wolves" came to him in 1986 when he read an historic account of a Civil War wagoner who discovered an abandoned frontier fort.

In 1986, Blake was at his lowest point. He had no publisher, no agent and no prospects. He was using his battered 1970 Chrysler for both home and office. He had supported himself for the past ten years with odd jobs and living on the edge. He was washing dishes in Arizona when he heard from Kevin Costner.

Blake had an unpublished script in which he had poured his soul, "Dances With Wolves," and he had left it with Costner. They had met five years before when Costner played lead in his first film which was also Blake's first screenplay, "Stacey's Knights" and they had become pals. In May 1987, he got a call from Costner that he wanted to do the script as a film.

Costner starred, directed and co-produced a winner, "Dances With Wolves," from a script that they co-wrote. The film opened November 1990. The award-winning film, visually breathtaking, was a three-hour Western epic shot in South Dakota. It scored Oscars as Best Picture, Director, Adapted Screenplay, Cinematography, Editing, Original Score and Sound, a stunning seven Awards.

While working on the film, Blake was having night sweats. In March 1990, his right arm began to buzz on and off. After more tests, he was diagnosed with cancer in his chest cavity, Hodgkin's disease, considered an "easy cancer," curable. It was nonetheless ironic that just as his star began to rise, his body was failing him. After surgery to have his spleen removed and four months of intense radiation, he looked like a piece of walking wreckage but he was in remission. By the end of 1990 both the film and the novel, published as a paperback in 1988, turned out to be winners.

Bluntly reminded about the uncertainty of life and passionate about environmental issues, Blake lives in Topanga Canyon, a wilderness minutes away from Los Angeles, where he has dogs, cats and horses, single since splitting with his girl friend in February 1991.