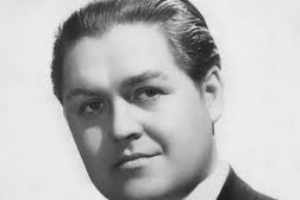 Johan Jonatan "Jussi" Björling (5 February 1911 – 9 September 1960) was a Swedish tenor. One of the leading operatic singers of the 20th century, Björling appeared for many years at the Metropolitan Opera in New York City and less frequently at the major European opera houses, including the Royal Opera House in London and La Scala in Milan.

Björling (surname also spelled as "Bjoerling" and "Bjorling" in English-language sources) was born in Borlänge, Dalarna, Sweden, in February 1911. The midwife's register shows he was born on 5 February; however, the church baptism records erroneously show 2 February, and this was the day on which he celebrated his birthday throughout his life. He was initially taught to sing by his father, David, an accomplished vocalist, and made his debut public appearance at the age of four with the Björling Male Quartet. The group performed in concerts throughout Sweden and the United States for eleven and a half years. He later studied opera with John Forsell.

Björling made his professional operatic debut as the Lamplighter in Manon Lescaut at the Royal Swedish Opera in Stockholm in 1930. This was soon followed by Don Ottavio in Mozart's Don Giovanni, Arnold in Rossini's William Tell, Almaviva in Rossini's The Barber of Seville and as Rodolfo in La bohème with Hjördis Schymberg, his favourite soprano in Sweden, as Mimi. This in turn led to engagements in Europe and the United States. Björling made his American concert debut at the Carnegie Hall in 1937; the following year, he made his debut at the Metropolitan Opera as Rodolfo in La bohème.

Björling went on to become one of the principal singers at the Metropolitan Opera during the 1940s and 1950s, with an interruption during World War II. He sang many major tenor roles in operas in the French and Italian repertoire, including Il trovatore, Rigoletto, Aida, Un ballo in maschera, Cavalleria rusticana, Faust, Roméo et Juliette, La bohème, Madama Butterfly, Tosca, and Manon Lescaut.

In December 1940, Arturo Toscanini invited him to sing the tenor part in Beethoven's Missa Solemnis in New York, a recording of which exists. He also performed the Verdi Requiem under Toscanini in 1939 in Lucerne, Switzerland, and in November 1940 in New York, another performance eventually transferred to recordings.

One of Björling's first LP sets was a 1952 studio recording of the complete Il trovatore, with Zinka Milanov, for RCA Victor. In 1953, he recorded the role of Turiddu in a complete version of Cavalleria rusticana opposite Milanov for RCA Victor, but because Victoria de los Ángeles was under contract to EMI, the recording of the complete Pagliacci, made concurrently with Cavalleria, was not released by RCA, but by EMI. Robert Merrill appeared on both albums, but Leonard Warren was featured only on the Pagliacci one, as Tonio.

In the summer of 1954 Björling recorded Puccini's Manon Lescaut in Rome with Licia Albanese as Manon, and in 1955 he recorded the role of Radames in Verdi's Aida opposite Milanov in the title role. With de los Angeles and Merrill, Björling made a widely admired recording of Puccini's La bohème conducted by Sir Thomas Beecham. Björling's recording of Madama Butterfly, with de los Angeles in the title role and conducted by Gabriele Santini, is also widely celebrated. In Victoria de los Angeles' s biography by Peter Roberts (Weidenfield and Nicolson, 1982), de los Angeles noted that "In despite of technical developments, none of the Jussi Björling recordings give you the true sound of his voice. It was a far, far more beautiful voice than you can hear on the recordings he left".

Björling sang the part of Mario Cavaradossi in the 1957 complete stereo recording of Tosca, recorded by RCA Victor in Rome with Erich Leinsdorf conducting. The tenor was awarded the 1959 Grammy Award for Best Classical Performance - Vocal Soloist (With Or Without Orchestra) for his recording Björling in Opera.

Björling was known as the "Swedish Caruso". His son Rolf, a successful tenor in his own right (although not at the level of his famous father), and his grandson Raymond are inheritors of the "sound".

His widow, Anna-Lisa Björling, published a biography with the cooperation of Andrew Farkas that described Björling as a loving family man and generous colleague. However, Anna-Lisa did not attempt in the book to hide the destructive influence of Björling's alcoholism.

On 15 March 1960, Björling suffered a heart attack before a performance of La bohème at London's Royal Opera House, Covent Garden. However, he still performed that night. He died of heart-related causes (enlarged heart) six months later in Siarö, Sweden, aged 49. One of his final recordings was the Verdi Requiem conducted by Fritz Reiner for Decca Records which was recorded as late as June 1960 with Leontyne Price, Rosalind Elias and Giorgio Tozzi. He is buried in the little church cemetery at Stora Tuna, Sweden.

The Jussi Björling Tenor Competition took part in Borlänge in 1994. 125 tenors from 38 countries participated and winner was the Chinese Deng Xiao-Jun.

An archive of nearly all of Björling's recorded performances, photographs, letters, recital and opera programs, reviews, obituaries, and other items related to his career is maintained at the Jacobs School of Music at Indiana University Bloomington.

Luciano Pavarotti, in a 2007 interview for the Swedish daily newspaper Svenska Dagbladet, stated that "When I'm about to train a new opera, I first listen to how Jussi Björling did it. His voice was unique and it's his path that I want to follow. I would more than anything else wish that people compared me with Jussi Björling. That's how I'm striving to sing."