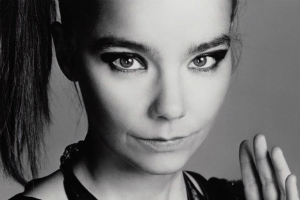 Icelandic singer and recording artist. Bjork was a guest artist at the Hollywood Academy Award ceremonies on 3/25/2001, performing a song of hers nominated for an Oscar with a band and a 55 piece orchestra. She gained as much press coverage for the odd costume she wore, that of a swan draped over her body.

An alternative "techno-electronic" musical artist, Bjork has appeared in a movie, a tragic musical, "Dancer in the Dark" with Catherine Deneuve, for which she won Best Actress at the Cannes Film Festival.

Bjork has always been a musician and claims that she thinks in music rather than words or pictures. Elfin, strange, quirky, unique, her voice is soaring and piercing; unearthly. She was a famous singer in Iceland by the age of 13, and in her late teens-early 20’s she formed a band. Singing in English, she became famous in the English-speaking world with their first album in early 1987. She soon was on her way to being a multi-millionaire with record sales.

Bjork is about 5 ft 3 in, which is very small for a Scandinavian woman, and has nearly black hair, also unusual; a strange brand of beauty. A single mother, she tends to go out with black musicians, although the father of her son is Icelandic. They never married but were together for a few years and he is still involved in the child's life. They were in an intense relationship that began when she was about 16, living together from the time they met. She wears a little silver pendant in the shape of a sperm.

Her millions of fans tend to be a bit quirky themselves, into technology and alternative ways of looking at the universe, including astrology. Along with musical talent, she is noted for temper that once led her into beating up a photographer. During the mid-80s she moved to London, England, where she lived for about a decade before getting homesick and returning to Iceland, where she actually owns her own island.

Her first band, the Sugarcubes, had a hit with their first album but their next two were less and less popular. She ditched the band (which at one point included her son's father) in the early '90s and went solo because she wanted to do electronic music (techno, the stuff people play at raves, music created partially on computers) and they did not. All her solo albums (about five by 2000) have been very successful. She works with extremely unique video directors and fashion designers to create the look she has -in one of her videos features two robots making love. Bjork has more "credibility," respect for her artistic talents, from reviewers and fans than almost anybody else working today--she's considered the artist of the pop world. Madonna pursued her in a desperate attempt to do a duet together, but Bjork refused, consenting only to write a song and letting Madonna record it without her.