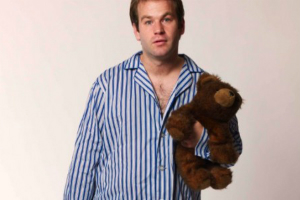 Birbiglia has starred in three Comedy Central specials and has released three albums with Comedy Central Records: Two Drink Mike (2006), My Secret Public Journal Live (2007), and Sleepwalk With Me Live (2011). My Secret Public Journal Live was named one of the best comedy albums of the decade by the Onion AV Club and Sleepwalk With Me Live debuted at #1 on the Billboard Magazine Comedy Charts.

In 2008, Birbiglia opened Sleepwalk With Me, a one-man show that straddled standup comedy and theater, off-Broadway at the Bleecker Street Theatre. The show was presented by Nathan Lane and the New York Times called it "simply perfect." Time Out New York named it their "Show of the Year" in 2009.

Birbiglia followed up his theatrical debut with Sleepwalk With Me & Other Painfully True Stories, a book which debuted as # 29 on the hardcover nonfiction New York Times Bestseller List and number four on the hardcover nonfiction section of the Washington Post Political Bookworm Best Sellers. Birbiglia was also a finalist for the 2011 Thurber Prize for American Humor for Sleepwalk With Me & Other Painfully True Stories.

Birbiglia made his feature film debut with Sleepwalk with Me, a film based on his one-man show of the same name which he wrote, directed, and starred in. The film premiered at the 2012 Sundance Film Festival and won the NEXT Audience Award. It was selected in the "Festival Favorites" category at the South By Southwest Film Festival in Austin, TX  and also appeared in the Nantucket Film Festival where it won the award for best writer/director. The film was produced by Jacob Jaffke and This American Life's Ira Glass and stars Birbiglia, Lauren Ambrose, Carol Kane, James Rebhorn, and Cristin Milioti and has cameos by Kristen Schaal, Wyatt Cenac, David Wain, Jessi Klein, John Lutz and Marc Maron.

In addition to starring in Sleepwalk With Me, Birbiglia has acted in the films Going the Distance, Cedar Rapids, and Your Sister's Sister, and in the HBO series, Girls.

In 2011, Birbiglia mounted his second one-man show, My Girlfriend's Boyfriend, which ran for four months off-Broadway and won the Lucille Lortel Award for Outstanding Solo Show. He toured My Girlfriend's Boyfriend around the world with tour dates in the US, Australia, Canada, and the UK. The show is described as Mike sharing a lifetime of romantic blunders and miscues that most adults would spend a lifetime trying to forget. On this painfully honest journey, Mike struggles to find reason in an area where it may be impossible to find—love. He is also turning it into a film, like Sleepwalk With Me, and although the show is autobiographical, the film will not be, nor will the main character be a comedian, rather a journalist. On June 2, 2013, Mike performed it on the last date of 20 shows at Carnegie Hall.

On This American Life

Birbiglia is a regular contributor to the Public Radio International-distributed program, This American Life.

Episode 361: The Fear of Sleep

Episode 370: Ruining it for the Rest of Us

Episode 374: Somewhere Out There

TAL: Live: Scene of the Crime

Birbiglia lives with his wife, Jen Stein, on New York's Upper West Side.

Birbiglia has rapid eye movement behavior disorder, which once caused him to run out of a second-story window of a motel he was staying in Walla Walla, Washington, while on tour. As a result of the accident, Birbiglia received 33 stitches in his leg.

Because of his condition, Birbiglia's physician stated that while he travels, Mr. Birbiglia should never stay on any floor higher than ground level for fear of accidental suicide by way of leaping out of a window.